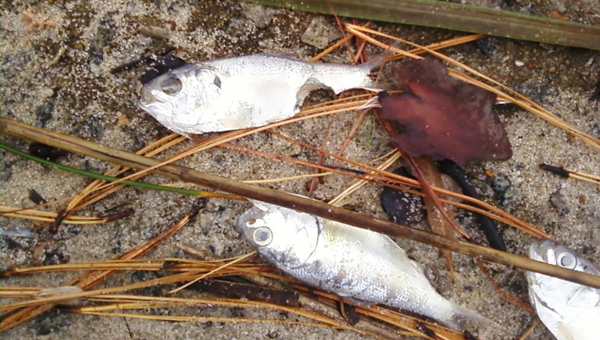 PAMLICO-TAR RIVER FOUNDATION | CONTRIBUTED
SOMETHING FISHY: Juvenile menhaden are being attacked by a fungus that causes open sores and death. For the second year running, the Pamlico and Neuse rivers have seen deaths in the hundreds of thousands as the water and air temperatures cool.

Monday, residents along the north side of the Pamlico River were shutting windows and cranking up the air conditioning. High temperatures weren’t the driving force behind closing up tight; rather, it was the smell: the smell of millions of dead juvenile menhaden, victims of a recent fish kill.

First signs of the fish kill were reported in Chocowinity Bay on Sept. 27. Since, the number of menhaden falling prey to a combination of low oxygen, algal toxins and an infection of A. invadans, a slime mold causing ulcerous lesions that often lead to death, has risen astronomically.

“It’s a pretty vast expanse of the river,” said Jill Paxson, environmental regional supervisor with N.C. Department of Environment and Natural Resources. “It would be in the millions; it would be silly to say it’s even in the low millions.”

The fish kill is immense — spanning the width of the Pamlico from the City of Washington, down past Blounts Bay, according to Heather Jacobs Deck, riverkeeper for the Pamlico-Tar River Foundation. And for now, an ongoing cycle of wind and low oxygen in the river means there is no end yet in sight, Paxson explained.

According to Paxson, a combination of factors is responsible for the massive fish kill. This time of year, menhaden are migrating to the ocean to ride out the winter, but lower water temperatures put more stress on their already tapped out immune systems: low dissolved oxygen, high nutrient content caused by land runoff, changes in salinity, can all contribute to illness. Add to that, dropping water temperatures promote the growth of algae, some of which emit toxins to kill off other, competing, types of algae. Since menhaden are filter feeders, they absorb toxins directly into their bloodstreams. The mix of all these elements plus a slime mold infection and the disease spreads quickly through schools of fish.

Paxson said heavy infections of the mold can be the direct cause of fish kills, but it is rare. In most cases, the infection plays a secondary role, weakening the fish, making them more susceptible to low oxygen or blooms of toxic algae.

“They’re schooling fish so they pack together. They’re huddled in a mass, but they’re too weak because they have limited oxygen — they’re sucking up each other’s oxygen,” Paxson explained. “With all the things that are going on, it’s a tangled web.”

It’s a tangled web that gets even more complicated due to the wind, Paxson said. A strong wind out of the south is likely to cause the upwelling of low oxygen water on the south side of the river. In a few days, when the wind shifts, the same will happen on the north side. And the dead and dying menhaden will be blown from one side of the river to the other.

“There’s no telling what’s going to happen in the next few days,” Paxson said.

Menhaden aren’t the only fish being affected, however, their weak immune systems make them less likely to survive.

One of the questions being raised is whether larger fish — like puppy drum, rockfish and flounder — are being affected by eating the diseased fish they prey on. There’s no definitive answer to that question as of yet.

“We’re looking into contacting some people with the Division of Health and Human Services,” Paxson said.

“I have a lot of questions I’m trying to get answered,” Deck said. “We don’t want to be alarmists, but we just don’t know.”

Deck said that fish samples taken last week have not been processed because the National Oceanic and Atmospheric Administration (NOAA) lab doing the processing has been closed because of the federal government shutdown.

Until the fish kill abates, Deck has this advice: “I think it still stands that the best thing for people to do is not be out there and swimming.”

Reporting to NCDENR allows the agency to build its database to track fish kills. To report a fish kill in your area, call 252-948-3999.