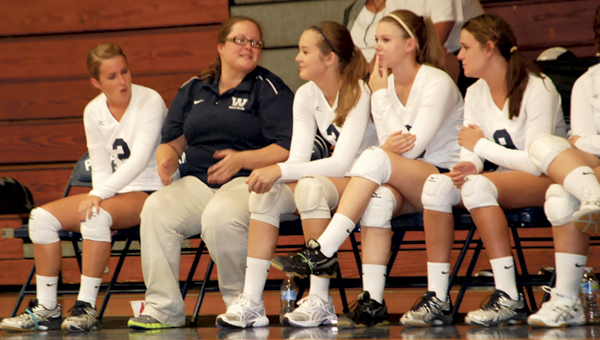 Washington volleyball coach Kelly Slade (second from left) guided the Pam Pack to its first playoff victory in over a decade and was named the WDN Coach of the Year for the second straight season. (WDN Photo/Brian Haines)

The scene was pure bliss. The Washington volleyball team had just won its 10th straight game and clinched its first playoff victory in 16 years in front of its hometown fans by blowing by First Flight in the first round of the NCHSAA 2-A playoffs.
And thanks to coach Kelly Slade, it’s safe to say it’s a scene the Washington faithful won’t have to wait another decade to see again.
Three years ago Slade inherited a volleyball program that used to display that kind of jubilation after winning sets. However, since taking over the team the Pam Pack has ascended each season and turned the corner on its losing ways.
In her rookie year, Slade guided Washington to a five-win season, which was followed by a 12-9 record and the school’s first playoff appearance since 1997.
This year, Slade led the Pack to a 17-8 (8-2) record, a second-place finish in the Eastern Plains Conference and helped the team capture that elusive playoff victory to be named the Washington Daily News Volleyball Coach of the Year for the second straight season.
“I think that our program is continuing to grow. Each year we’ve accomplished something different,” Slade said. “This year we won the conference tournament, we beat J.H. Rose for the first time – which I think is my No. 1 highlight this year – and we beat South Central twice.
“We’ve hit a lot of goals that we’ve had since I started here and, most importantly, we won our first round playoff game. It just keeps getting better and it’s exciting.”
The 2013 season was no doubt thrilling, but equal parts challenging. Despite the team’s success, Slade began the season with only eight players on its varsity roster.
That number would shrink as senior Alana Jefferson decided to pursue soccer and cross country, and junior Adrian Tyson was sidelined for a few games due to illness.
“We started off shorthanded and then we lost some key players for a while. The season was very hard,” Slade said. “We had to make some decisions and make up some new lineups numerous times. There was a lot of times where we had to shake things up and see what would work.”
If Slade and her coaching staff panicked, they never showed it on the outside.
Instead, they called up a boatload of players from the JV club and those players stepped up to the plate.
“I had to have some help. There was only seven of us, and when Adriana was sick there was only six of us,” Slade said. “I had to call up some girls from JV and they really helped us out. I’m really proud of the girls that came up, and a lot of them were freshmen.”
Aside from bringing in some new blood, Slade had to shift around some veterans. Most notably star senior middle hitter Megan Corey, who didn’t flinch when she was asked to play setter for a stretch.
“I think we had the ability to be successful this season because of players like Megan Corey and Allison Brantley,” Slade said. “I asked a lot of both of those ladies. Megan set and hit and Alison was my libero and then my setter.
“We were changing positions and if the girls would not have been as motivated to win and team players we would have had a long season.”