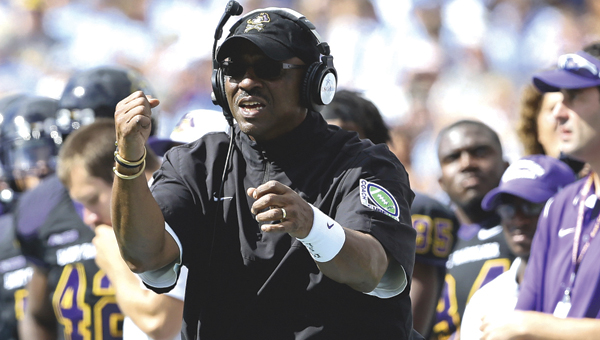 GREENVILLE — Marshall game? What Marshall game? That’s the approach the Pirates are taking as they prepare for Monday’s Beef ‘O’ Brady’s Bowl matchup with Ohio at 2 p.m. inside Tropicana Field in St. Petersburg.
“(The players) have moved on from the Marshall game and I don’t bring it up — at all. There’s no need to,” East Carolina head coach Ruffin McNeill said during the Pirates pre-bowl press conference inside the Murphy Center. “They’re very smart and they realize they can play better.”
The Pirates (9-3) will have to play much better then they did in their 59-28 regular season finale loss to the Herd, a defeat that cost then the Conference USA East title. However, if they can, there will be some nice rewards.
East Carolina enters the bowl matchup with Ohio (7-5, MAC), exactly one win away from recording the second-highest win total in school history.
A victory would also snap a four-game postseason losing streak and give the Pirates their first bowl victory since they downed No. 22 Boise State 41-39 in the 2007 Sheraton Hawai’i Bowl.
“I’m proud of our accomplishments as a team. We had goals and we fell short of one, but we accomplished some others,” McNeill said. “We shot for the sun and the moon and we got a few stars on the way down.”
East Carolina has played Ohio only twice in its history and won both matchups. The first contest was a 55-45 victory in Greenville in 1996 and the second one was a 21-14 win in Athens, Ohio in 1998.
The Bobcats, who are led by ninth-year coach Frank Solich, began the season on fire as they won six out of their first eight games, which included victories of Marshall (34-31) and Miami of Ohio (41-16).
However, Ohio’s heat wore off as the temperatures dropped. After going 6-2, the Bobcats lost three straight games in which they were outscored 123-16.
Ohio is led by third-year starting quarterback Tyler Tettleton, who owns 23 school records and is the son of former MLB catcher Mickey Tettleton.
“(Ohio) is a little bit like ODU as far as their quarterback,” McNeill said. “Tyler is a three-year starter that has a lot of reps under his belt. He has good bloodlines; of course everybody knows his dad was a good baseball player. He’s mobile and well coached. He’s a good field general.”
Like the Pirates, the Bobcats will try to race up and down the field.
“Offensively, they play an up-beat NASCAR-style on offense just like we do,” McNeill said. “We have to be ready to change looks (on defense). You can’t just stay in one thing versus (Tettleton).”
Aside from snapping ECU’s postseason skid and notching a double-digit victory total, McNeill said he is “obsessed” with seeing his players end the year with a victory.
“To end on a positive note, I want it for the players. I’m obsessed with making sure we do that because they have done everything that I’ve asked,” McNeill said. “… I’m really honored to be around them and I’m proud to be their coach.”