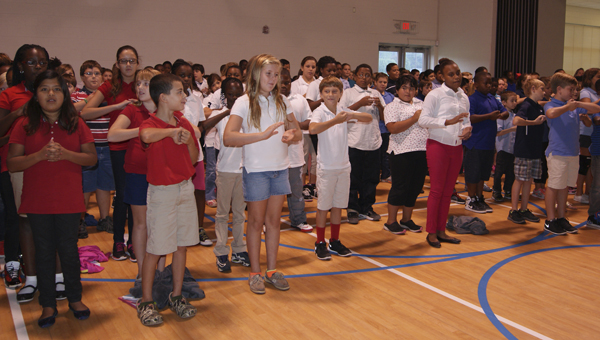 JOHN SMALL ELEMENTARY | CONTRIBUTED
RED, WHITE AND BLUE: John Small Elementary held its Constitution Day on Sept. 17, celebrating the constitution and the meaning of the American flag and the freedom it represents. Fifth-grade students, donning red, white and blue shirts, gave a performance, which featured them reciting the Preamble and using sign language to represent its words.

A local school recently celebrated the United States Constitution with an assembly where students learned about and displayed their patriotism.

On Sept. 17, John Small Elementary held its annual Constitution Day, which highlighted American freedom, how to properly handle and display the American flag and the significance of the American Constitution, said Raul Olivares, fifth-grade language arts and social studies teacher at John Small. Washington High School JROTC joined the students for the assembly and presented the colors, and Ret. 1st Sgt. Beattie, who heads the JROTC, gave a presentation of how to properly fold the American flag. Beattie also gave students information regarding the handling of the flag, such as never letting it touch the ground, keeping it clean, taking it down if it’s raining and only displaying it at night if there is a light shining on it, said Breanda Bohn, fifth-grade language arts and social studies teacher. A teacher also played the National Anthem and God Bless America using a trumpet. 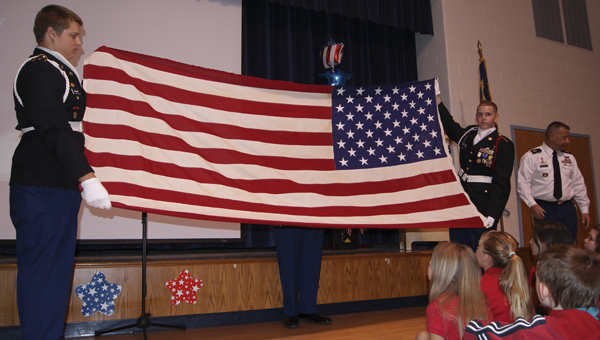 JOHN SMALL ELEMENTARY | CONTRIBUTED
COLORS: Washington High School JROTC was in attendance during John Small Elementary’s Constitution Day, at which it presented an American flag and how to properly fold it.

Bohn said a local, retired physician allowed the school to use a special flag during the assembly. The flag was draped over a WWII veteran’s casket and given to Sandy’s sister-in-law’s family by the Kennedys. It also was flown over the nation’s capital for some time, Bohn said.

“It was draped over a World War II veteran’s casket, given to the family by the Kennedys,” Bohn said. “His wife had passed and this gentleman’s sister took it. It flew over the nation’s capital, and it has a lot of meaning. It’s a larger flag. [Beattie] focused on the importance of the symbolism of the flag. He took this flag, and they had worked on folding it properly in a triangle. They unfolded it and showed it to the students.”

During the assembly, the fifth-grade students presented the Preamble of the United States Constitution and recited it,  using sign language to represent its words, Bohn said. The students did this is conjunction with their curriculum, in which they learned about Helen Keller.

“Not everyone can communicate verbally so we have options of signing,” Bohn said. “We do the Preamble every year with sign language. We talk about the meaning, what the Constitution talks about, we wear red, white and blue shirts.”

Bohn said it was special for the fifth graders because they witnessed the assembly last year as fourth-graders. The fourth-graders at this year’s assembly will have the chance to give the same presentation next year.

“I know we surprised Beattie,” Bohn said. “He was very proud that we did that. We divided them into red, white and blue and performed for the fourth grade. You could’ve heard a pin drop. You have to show that you’re into it so other people take it serious. That’s a big, big item for us.” 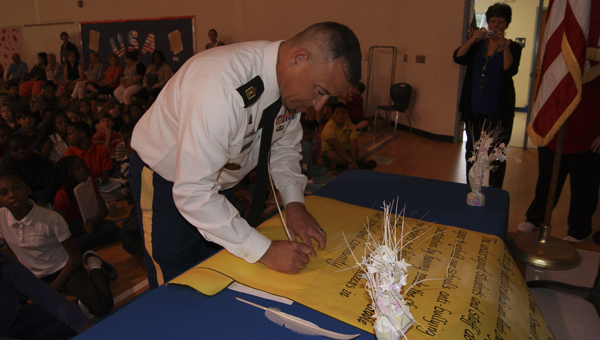 JOHN SMALL ELEMENTARY | CONTRIBUTED
JOHN HANCOCK: Ret. 1st Sgt. Beattie with Washington High School JROTC signs John Small Elementary’s Anti-bullying Constitution, which was also signed by all students, faculty and staff. The constitution is a pledge for the school to be bully-free.

The students at John Small also celebrated Constitution Day by coming up with a constitution of their own, Bohn said. An art teacher at the school drew and cut out a big scroll-like piece of paper, which was used as the school’s anti-bullying constitution. Students, faculty and staff, as well as Beattie, signed the document, which was posted in the school’s hallway for everyone to see. The document will be a constant reminder to students that they signed it, agreeing to abstain from bullying others, Bohn said.

“We, the people of John Small Elementary, came up with an anti-bullying constitution,” Bohn said. “Everyone signed that. Beattie was our John Hancock. He said he believed everyone should be able to come to school without having to worry about their safety and everyone should have a secure and safe school to come to. We signed that and it stays in our hallway all year. If a student forgets about it, they are reminded they signed that. It gets them to think.”