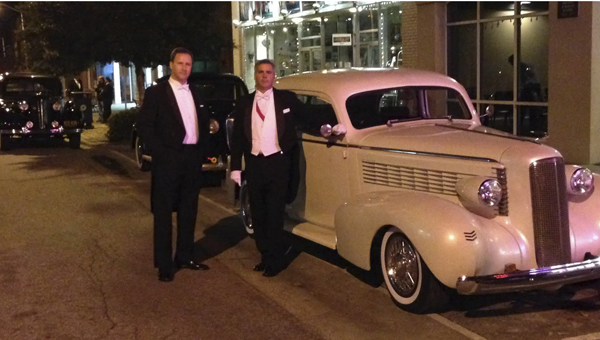 BEAUFORT COUNTY ARTS COUNCIL | CONTRIBUTED
AND…SCENE: (Left) Actor Steve Kwiatkowski, who plays “Andrew” in “Holey Matrimony!” and Jeff Winkler, as James, the millionaire, wait outside the Turnage Theater to film a scene. Parts of the movie were filmed at the Washington Theater in March, and the film will premiere at the theater at 8 p.m. tonight.

Thirty local people who answered the call to get dressed up and head to the theater will make their big screen debut at the Turnage Theater tonight.

In March, director of the movie “Holey Matrimony!”, Diana Lenska, put the call out for extras for scenes filmed inside and outside the Turnage Theater during the making of the comedy. In response, area residents drove their classic cars to West Main Street; others dressed to the nines, circa the 1940s, to participate in scenes involving the premiere of the film “Sudden Desire” within the film “Holey Matrimony!”

According to Beaufort County Arts Council Executive Director Joey Toler, when Lenska contacted him in February, he immediately recognized a win-win situation.

“They needed a circa 1940s movie house and movie marquee and they knew about the Turnage and called,” Toler said. “And, of course, we’d just moved into the theater, and I thought ‘This is good opportunity to get our name out there and get it on the map.’”

The filming took place on a Saturday, from about 4 p.m. to 2 a.m. West Main Street was closed down to accommodate the filming and the use of a crane from which exterior scenes were shot.

Toler, who saw a brief preview Thursday when BCAC staff did a test run of the movie on the theater’s screen, said many recognizable faces made into the movie.

Toler was also surprised to find that the speaking role he was given — with 20 minutes of preparation — made it into the film.

“I thought for sure I’d end up on the cutting room floor,” Toler said. “But I saw it yesterday and all I could do was stand there and laugh.”

“Holey Matrimony!” is described as “a 1948 comedy-drama starring Diana Lenska as Hollywood screen playwright Laura Chandler, who returns to her hometown of Wilmington for a bit of revenge, which reveal secrets, plot twists and some shocking surprises.”

The film premiers at 8 p.m., with actors arriving to the event at 7:30 p.m. Toler said their arrival will be filmed, as well. Tickets are $10. The Turnage Theater is located at 150 W. Main St., Washington.

Several candidates — local and statewide — picked up votes Friday after the Beaufort County Board of Elections canvassed ballots... read more