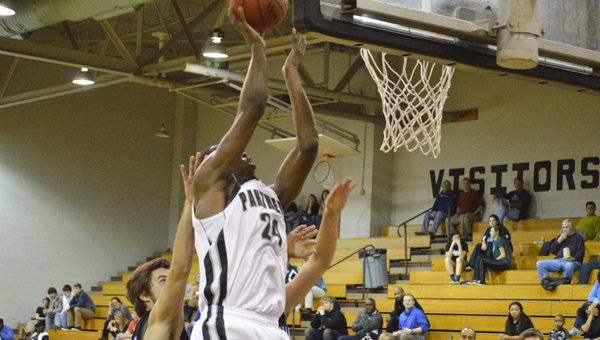 DAVID CUCCHIARA | DAILY NEWS
ON THE BOARDS: Junior Edrice Adebayo elevates for a layup in the third quarter of Wednesday’s win over First Flight. He finished with 41 points and 19 rebounds.

PINETOWN — With Roy Williams in attendance, the traditionally black, white and silver crowd was speckled with Tar Heel blue, as Edrice Adebayo and the Panthers knocked off First Flight, 87-69.

After taking care of the Dixon bigs last week, Northside was faced with containing the Nighthawks’ arsenal of sharpshooting guards Wednesday evening. And with Adebayo down low, First Flight head coach Chad Williams would rely on his guard play to preserve the team’s undefeated record (7-0).

But the matchup was a favorable one for head coach Mike Proctor, who has been tasked with building an undersized roster around one of the area’s premier players. While the Nighthawks double-teamed Adebayo for most of the contest, Dalton Etheridge, Reggie Slade and Jabari Ashe spread the floor and capitalized in open space.

“I still think our guards get nervous when they miss a few shots because we’re so inexperienced. I’m not saying young, but they haven’t played a lot. It’s tough and I think our guard play needs to be able to score a little more. We did enough to come away with the ‘W’ tonight,” Proctor said.

In the first quarter, it wasn’t Adebayo, but Etheridge coming up with timely rebounds, helping out offensively when needed, dropping five points through the first eight minutes. Like a ticking time bomb, it was only a matter of time until the Northside big man would exploit the Nighthawks’ defense.

“All good players have bad halves, bad quarters, but they just always have to bounce back and get that mentality to win,” Adebayo said.

After eight points and no rebounds in the first quarter, Adebayo quickly found his comfort zone in the paint, a dangerous concept for a guard-heavy opponent. And for the rebounds he didn’t reel in, Etheridge was there to clean up. However, even with 27 Northside points in the second quarter, the hot hands of Jack Konstanzer and Tyler High kept First Flight in the game, as the Panthers led 44-34 at the half.

“We were trying to run them off the three-point line, but we didn’t do too good of a job of that. We were just trying to contest their shots the best we could and I thought we did, but they can really shoot,” Proctor said.

Konstanzer’s hot shooting continued into the second half, hitting four three-points in the third quarter, along with a pair of free throws. Once sophomore small forward Devyn Dodson caught fire, Northside couldn’t stop the onslaught of jumpers.

But the Panthers’ offense was far from stagnant. After an ineffective first half, Slade began to work his way inside the paint, hitting three hard-earned layups, while senior Chris Jones contributed vital minutes off the bench.

After both teams matched one another in the third, First Flight began to force contested shots, opening the door for Adebayo and the Panthers to pull away.

Through the final eight minutes, Slade kept working his way to the line, as Adebayo dominated the boards. Konstanzer was limited to just one three-pointer and First Flight soon found itself down double digits.

“I knew coming in they could shoot and were going to hit a lot of threes,” Proctor said. “They’re well coached and shot the ball well. It was a good basketball game. We answered the call, even when they came back and made shots.”

With the win, Northside improves to 3-0, while handing First Flight its first loss of the season.

Adebayo finished with 41 points and 19 rebounds, while Slade notched 13 points. For the Nighthawks, Konstanzer led his team with 37 points.