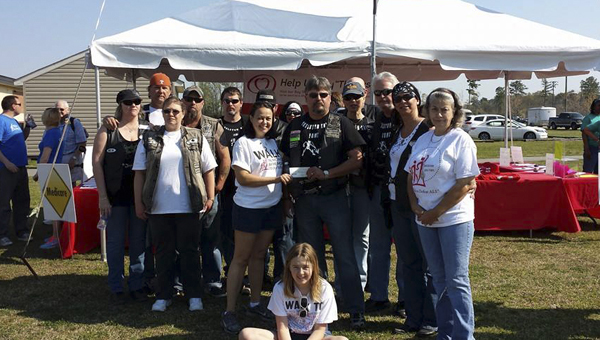 IRA GARRETT
WORTHY CAUSE: Ira “Screech” Garrett presents a check to Barbara Wilkins, his niece and daughter of Chuck “Knucklehead” Garrett, who died of ALS in 2013, at last year’s Down East ALS Walk. The Garrett brothers were both members of Iron Order Motorcycle Club, Skeleton Krew Chapter in Washington, which made last year’s single largest donation to the ALS walk.

It started with a diagnosis for Chuck Garrett: that of amyotrophic lateral sclerosis — ALS, Lou Gehrig’s disease. The neurodegenerative disease would take his life in 2013, but not before his brothers banded together to raise money for ALS research.

Chuck “Knucklehead” Garrett was a member of the Iron Order Motorcycle Club, the Skeleton Krew Chapter, of Washington. Once a year since 2011, the club has held a benefit to raise money for ALS research — a disease for which there is no known cause, and no cure. In those four short years, the club went from raising $150 to donate the Down East ALS Walk, to $8,000 last year — the walk’s largest donator for two years running.

April 11, the Iron Order will host its fourth benefit, one which Chuck Garrett’s brother Ira hopes will be even more successful.

“People are finally starting to realize what ALS is,” Ira Garrett said. “It used to be nobody knew anybody who had it. Now, everybody knows several people who’ve had it.”

Held at the motorcycle club’s Terrapin Track Road clubhouse, the benefit will start with a memorial ride at noon, followed by a poker run, drawings, games, a 5 p.m. dinner and a lineup of bands that last throughout the day: Kayla Grady, Livewire, Back Porch Rockers and the popular Eli Craig Band.

“It’s anybody — from other clubs to the general public. There’s a lot of people who are not club riders, just the general public,” Ira Garrett said. “The ride itself was pretty small last year because the weather was pretty awful. The year before, we had over 100. We were actually pretty pleased we raised $8,000 in the pouring rain and a mud fest.”

The money raised through the benefit is donated to the Down East ALS Walk team started by Chuck Garrett’s daughter, Barbara Wilkins.

There are 300 Iron Order chapters in 10 countries worldwide — each is required to hold one major fundraiser a year. But the Skeleton Krew Chapter supports Relay for Life, Ride for the Cure, Disabled American Veterans, individuals struggling in the community and more–at last year’s national rally, of the 300 chapters, the Washington chapter ranked second for its community involvement.

There’s no admission to the event. Entry fee for the benefit ride is $15, $5 for a rider. The Skeleton Krew Chapter’s clubhouse is located at 1186 Terrapin Track Road, Washington. For more information, call Ira “Screech” Garrett at 252-947-0899.