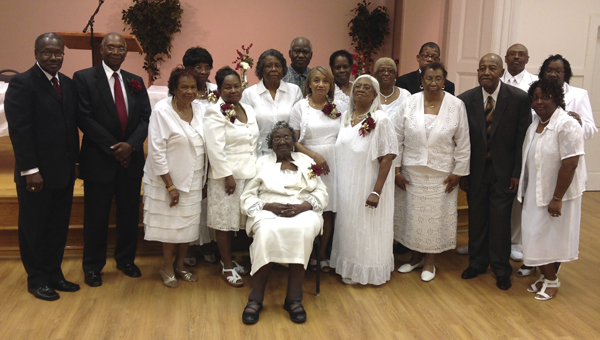 A local alumni organization is preparing to unveil a monument remembering its alma mater, as part of its annual reunion and celebration.

The Belhaven General Alumni Association will host its 53rd annual homecoming celebration May 8-10. This year’s theme is “Lest We Forget, Our Strong Bonds Shall Ne’er Be Broken,” a line from its school song, said Cynthia Heath, association president. This year, the alumni will unveil a historical monument during a dedication ceremony. Former students, parents and staff members of the high school, as well as their families, donated the monument and 150 imprinted bricks that surround it Heath said.

Heath said the association was founded in 1962, during which the high school was still in operation before desegregation. Since the school closed in 1968, the group has held annual reunions, in which former students and their families celebrate the heritage of the high school. The Belhaven Alumni Club, the parent club under the association umbrella, will be joined in the festivities by other chapters of alumni that have ties to the high school, Heath said.

Festivities will officially begin with the arrival of alumni on Friday morning to attend the alumni banquet at 7 p.m. at the Wilkinson Center. Attire is semiformal and donations of $30 are requested. The evening will culminate with the presentation of alumni awards, followed by a memorial service. Saturday’s activities will begin with the mile-long parade featuring a number of local marching groups and community organizations. The parade is slated for 9 a.m. on Railroad Street in Belhaven. Any organization or person interested in participating should contact any members of the Belhaven Alumni Club or the Triangle Chapter of the Belhaven Alumni Club, Heath said.

After the parade, the monument will be dedicated, followed by a festival, featuring vendors of food, jewelry, art and other items, Heath said. Class reunions within the club will be held throughout the day and will be announced by class coordinators.

On Sunday, alumni worship services will be held at the St. Reddick Missionary Baptist Church on Pamlico Street at 10 a.m., featuring guest speaker Donald O’Neal, the dean of Hosanna School of Ministry in Belhaven.

The group hopes to have as many alumni attend and participate in the festivities as possible, Heath said.

“Everyone is invited to come and join in all the festivities, and this monument is a visible sign of our legacy, and as time passes, our memories are becoming dimmer and shortly after, there will not be any memory of Belhaven High School,” Heath said. “This monument will serve as a reminder to our young people of our heritage and as a reminder to us of the struggles of our ancestors.”

NC long-standing hunting ban with guns pulled back by…