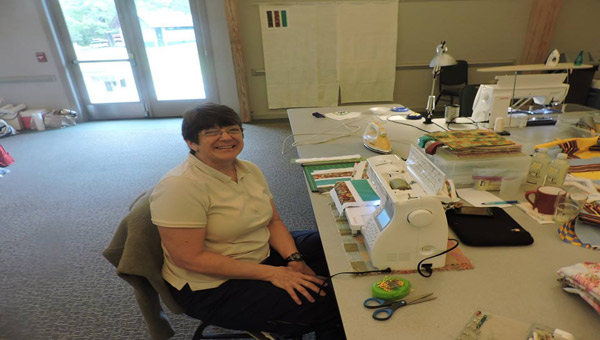 A Quilter rests from her work

Quilters Without Borders, a area group of women united by their passion for quilting, meet at the Eastern 4-H Center on April 25 for a retreat.

Machines hummed, fabric lines moved, and projects were on display.

“We started in October of 2008 and we have come twice a year. There is no particular guild or anything. It is just a bunch of friends that got together from Perquimans, Camden, Elizabeth City, and other places,” said Beard.

Normally 28 to 32 attendees come to the retreat.

“We used to meet at Camp Cale in Perquimans County. I just recently started a second group where they come in on Thursday. They leave Sunday morning and the second group comes in Sunday and leaves Wednesday morning. So I stay for a whole week,” explained Anita Beard organizer of the event.

Quilting or sewing projects can go all over.

“Sometimes they are making stuff for themselves or they are making it for a particular person. Some of the stuff goes to charity,” said Beard.
Beard noted that quilting is popular across the state.

“When I talked to Sara here at the 4-H Center, she noted that there is another quilt group that comes from Raleigh and Rocky Mount area. Also the Colonial Quilt Lovers of Elizabeth City and Camden had a quilt show last weekend at Knotts Creek in Elizabeth City. The Knitting Addiction Yarn Truck from the Outer Banks was there as a vendor,” said Beard.

The quilt show was a signature event for quilt lovers to see and hone their craft.

Quilts are judged on various aspects notably whether the seams are accurate and   the binding is full.

“Something like that has to meet. They can not overlap,” explained Beard.

Fabric for the Quilters without Borders group is obtained from quilt shops in Elizabeth City.

“The fabric itself comes from locations in Texas and Ohio. There is Moda and Checker as distributors. Some of the material is made in Japan,” said Beard.

But she pointed out that others were doing different things.

“There are thousands of possibilities. No one here is working on the same thing. It might be the same fabrics, but they are doing a different pattern,” said Beard.

The next Quilters Without Borders Retreat will be in October.

A Quilters without Borders Two group was set to arrive Sunday morning and set to leave Wednesday morning.

Beard and her friends did take time to rest in between the movement of their machines.

“We go for a walk or take a nap.Then we come back and start again,” said Beard.