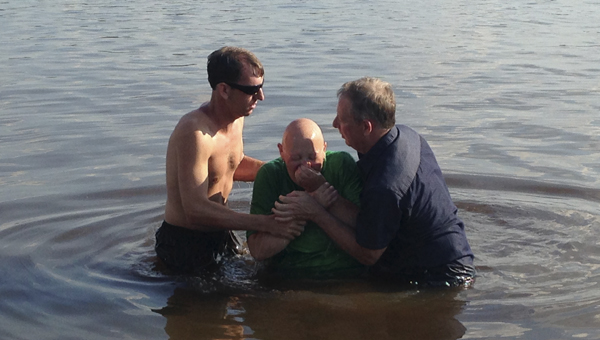 SADIE FOWLE
DOWN TO THE RIVER: Lee Winters (left), co-organizer of Praise Fest, helps Mike Rogers, pastor of The Church at New Bern, baptize a worshipper at Castle Island during last year’s PraiseFest at Festival Park in downtown Washington. The event is scheduled from 1 p.m. to 6 p.m. June 6.

For the past three years, worshippers of all denominations have gathered at the river to pray. This year will be no different, as the afternoon of June 6 will be dedicated to prayer and music, testimonials and foot washing at Festival Park in Washington.

“It’s not a church service. It’s about a church family,” said organizer Emily Mayne. “It’s about coming together as believers in unity to worship and honor the Lord. No one is excluded.”

PraiseFest launches at 1 p.m. with a welcome by Mayne, followed by a dedication and prayer by Washington Mayor Mac Hodges. At 1:15 p.m., a blowing of the Shofar — an instrument made from the horn of a ram, mentioned often in the Old Testament of the Bible — will launch the performance of contemporary Christian music band Covenant, which will be followed by guest speaker Pastor Michael Thornton, of Global River Church in Wilmington.

At 4:35 p.m., the Kinston-based troupe Groundbreakers will bring dance and testimony to the Festival Park main stage. And throughout the day, those in want of prayer can find it through prayer teams; those in need of baptism can hop on the scheduled boat rides to Castle Island where the rite will be performed; those desiring to take part in the practice of foot washing — giving and receiving — can do so at a foot-washing tent.

“You know, it’s very humbling to get your feet washed and to be the one washing,” Mayne said. “To me there’s just a humility in it that is just so touching, so moving.”

While the event is dedicated to anyone looking for an uplifting experience, Mayne said she hopes to draw both those ministered to, as well as those who do the ministering in their daily lives.

“We just have a heart for pastors this year and we just want to honor them. … We want to honor everyone, but particularly spiritual leadership,” Mayne said. “Really, it’s just a shout out for those whose heart is in ministry — it’s an opportunity for us to serve them, instead of them serving us.”

PraiseFest participants are encouraged to bring their own chairs, food and drink to go with the fellowship of prayer. The event is open to all, Mayne said.

“Anybody that God calls. All are welcome. I never worry about the numbers, because I feel like God has the right people there all the time,” Mayne said. “I’d love to see everyone there, because the presence of the Lord is there and it touches people.”