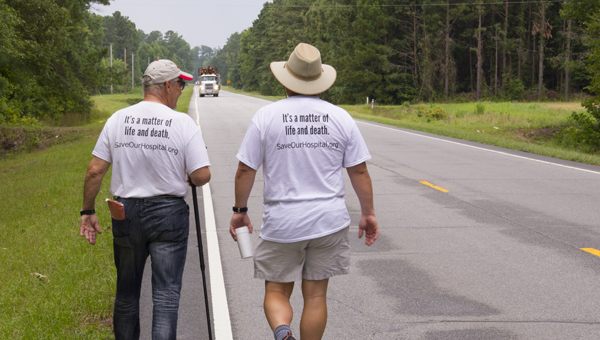 BELHAVEN — The distance from Belhaven to Washington, D.C., is 273 miles. By car, it’s a day drive, but for a group of people setting out on foot, the journey will take two weeks — two weeks in which Belhaven Mayor Adam O’Neal, civil rights leader Bob Zellner, N.C. NAACP President William Barber II and a group of walkers representing 14 states hope to start a national discussion about the plight of rural healthcare.

He referred to National Rural Health Association statistics: 283 rural hospitals are in danger of closing in the U.S. this year; 48 have already closed since 2010. The majority of these hospitals are in the South, and the hospital in Belhaven was one of them.

At 8:30 a.m. Monday, the walk to D.C. will be launched from the public docks at Wynne’s Gut in Belhaven. At 9 a.m., the 283-mile journey begins — the additional 10 miles added symbolic of the rural hospitals struggling to remain viable in a changing health care environment, with each mile representing each hospital. The route will run through the back roads parallel to I-95 and include a welcome by Virginia Governor Terry McAuliffe at the Governor’s mansion, O’Neal said.

“They have the same problem in Virginia as we have in North Carolina. They don’t have Medicaid expansion and the state is just not doing anything to fill the gap,” O’Neal said. “We’re not saying it’s anybody’s fault. We’re just saying we have a problem and we have to fix it.”

The problem, O’Neal said, happened when federal reimbursements for the uninsured began to decline under the Affordable Care Act. It was assumed by policymakers that states would expand Medicaid programs, which would make up the difference. North Carolina, however, was one of 23 states that declined to do so, and in each of these states these small hospitals — no longer economically viable — are closing their doors. Some areas face a future with no healthcare facilities at all; other places, like Belhaven, are moving to a new system of 24/7 clinics that funnel patients via land and air transports to larger medical centers, like Vidant Health Center in Greenville.

O’Neal believes the federal government could step in, as it did in 1947, when President Truman signed into law the Hill-Burton Act, which established rural community hospitals after World War II. Belhaven was the first Hill-Burton hospital to be built, according to O’Neal. It was also the first to be closed — on July 1, 2014, after Vidant Health, hospital board Pantego Creek LLC and the Town of Belhaven could not come to an agreement about how the transfer of the ailing hospital from Vidant to management under another entity would transpire. Shortly after, O’Neal made his first walk to D.C. to talk to lawmakers, and since, the Town of Belhaven and the N.C. NAACP have filed lawsuits against Vidant citing civil rights violations. The town is currently attempting to gain ownership of the hospital property through eminent domain. The plan is to apply for a USDA loan to reopen the hospital under new management once the property is obtained.

While O’Neal’s major focus is on reopening the Belhaven hospital, he said the walk to D.C. is relevant to all people living in rural communities.

“We are going backwards with healthcare in America. Hospitals are not like hardware stores; we can’t simply close them and not expect people to be affected. The walk must start a national debate about the condition of rural hospitals today. This is an American issue, regardless of party or politics,” O’Neal said.

“That’s why I know this will work. I know that we are going to get to America’s conscience. They need to know about it. I think it’s an opportunity to reach across party lines and do the right things for folks and be proud of themselves.”

A rally on the Capitol steps will take place when the walking party arrives in D.C. on June 15.

GOD’S HAND: Out of the ashes raises a mighty temple

JONATHAN ROWE | DAILY NEWSFROM THE ASHES: First Christian Church is in the midst of being rebuilt across from the... read more