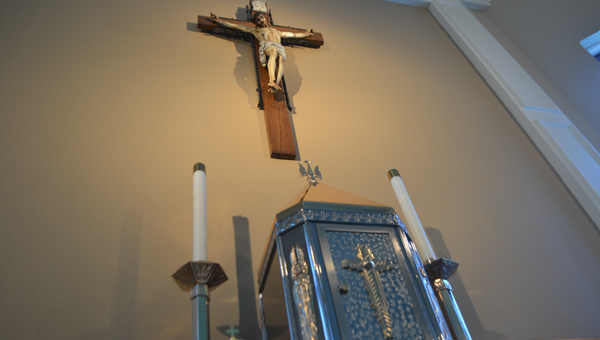 JONATHAN ROWE | DAILY NEWS
CATHOLIC TRADITION: Pictured is the Tabernacle, containing the Blessed Sacrament — the body and blood of Jesus Christ. The Catholic Church keeps it reserved at all times for two purposes — ministry to the sick and for worship and adoration. The priest places the Blessed Sacrament in a sacred vessel called a monstrance for adoration or special processions like Corpus Christi.

A Catholic church in Washington recently observed a traditional Holy day, something that has not been done in more than forty years.

On June 7, Mother of Mercy Catholic Church held Corpus Christi, a holy day in the Catholic church, dating back to the late thirteenth century, according to parishioner Mike Isbell. Officially known throughout the church today as the feast of “The Most Holy Body and Blood,” the celebration included an outdoor procession, in which Father Brendan Buckler of Mother Mercy carried a golden vessel called a Monstrance, containing the Sacred Host, consecrated bread representing the body of Christ. Buckler did this, walking under a canopy, with the help of assistants. The procession was led by a crucifix, along with an incense burner, and in some cases, small children sprinkle rose petals along the way, according to Isbell.

“The central belief of the Catholic Church is that the elements of bread and wine, when consecrated by a priest, become, in a very literal sense, the actual body and blood of Jesus Christ,” Isbell said. “Catholics understand the words of Jesus at the Last Supper, ‘This is my body….this is my blood…’ as recorded in the three Synoptic Gospels — Matthew, Mark and John — as literal, not just metaphorical.”

During the Corpus Christi procession of about 100 parishioners, participants sang the “Pange Lingua,” as they circled the block, coming back down Market Street and into the church where the ceremony of Benediction was held. The ceremony involved more hymns and prayers, a blessing by the church’s Eucharistic Lord and then placing the Host back into the Tabernacle where the sacrament is reserved continuously, Isbell said.

Isbell, a former Protestant minister, converted to Catholicism short of a decade ago, after studying the its practices and teachings and finding them to be true, he said.

“This was the first Corpus Christi procession I have ever seen except on the Internet,” Isbell said. “I have been Catholic for eight years, and this is a first for me. I feel sure it has taken place here in the past, but I haven’t done the research. It has been a great blessing. Cardinal John Henry Newman, the famous 19th century Anglican convert has said, ‘To go deep in history is to cease to be a Protestant.’ I found that to be the case. I love being Catholic now, not just because it’s beautiful, but because I have come to believe that it is true. Corpus Christi is just one of many opportunities the Church provides for us to grow in holiness and prepare ourselves for eternity.”

Isbell said Father Buckler is bringing back many traditions of the Catholic faith, including the Traditional Latin Mass, which is celebrated each Friday morning and occasionally on Holy Days. Many younger Catholics in today’s Church find themselves drawn to the ancient practices of the Church, and many of the younger priests are devoted to tradition, Isbell said.

Study of the early Catholic Church Fathers like St. Ignatius of Antioch, St. Polycarp and others, indicates Christians believed in the practice from the very beginning of the Church, with deeper understanding cited in passages like John 6 and I Corinthians 10 and 11, Isbell said. St. Juliana, a Belgian nun, promoted the idea, and in 1264, Pope Urban IV ordered the annual celebration of Corpus Christi on the Thursday following Trinity Sunday. Today, the tradition is observed in the United States on the following Sunday in order to encourage wider participation.

“Although it was always accepted in faith, the Church in the High Middle Ages felt the need to reemphasize it by encouraging a day of solemn observance to remind the faithful and proclaim to the world that Jesus is really and truly with us at all times in the Eucharist, or Blessed Sacrament, as it is often called,” Isbell said.