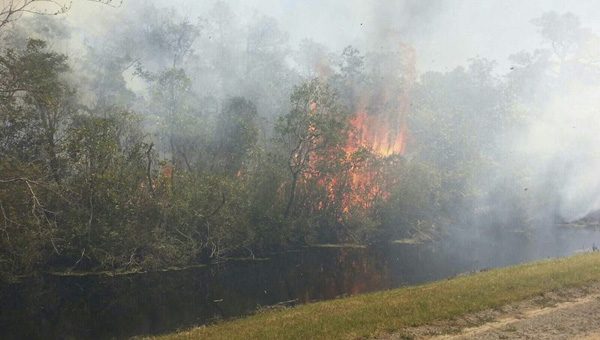 A Hyde County wildfire continues to engulf thousands of acres, reaching more than 14,000 acres on Thursday.

The Whipping Creek Fire grew rapidly since Wednesday and is now only about 15 percent contained, according to Bill Swartley, public information officer of the Incident Command Post Fire Information Center.

The quick spread was caused by Wednesday’s northeasterly wind gusts, according to a press release.

“Current suppression plans call for holding the fire south of Jackson and Maple roads. Friday’s predicted rainfall will not be bringing enough moisture to wet available fuels feeding the fire. Dry and sunny skies following the frontal passage will quickly dry what little precipitation falls on Friday,” the release stated.

“Right now our fire containment strategy is a broader reach than the fire footprint,” Swartley said. “This may be challenging because yesterday the wind was blowing very hard.”

The state Department of Transportation is still blocking off about a 30-mile stretch along U.S. Highway 264, between Stumpy Point and Engelhard, and is rerouting drivers to N.C. Highway 94 toward Columbia and east on U.S. Highway 64.

The N.C. Department of Environmental Quality issued an extended advisory Thursday afternoon for air pollution from the smoke. The amount of fine-particle pollutants were expected to exceed the standard of 35 micrograms per cubic meter averaged over 24 hours, which can impair breathing or irritate residents’ lungs.

“Smoke drift has been problematic within and adjacent to the fire footprint, but nearby communities have not experienced severe ground-level smoke. Fire officials recommend that if ground-level smoke does persist, it is best to remain indoors and keep windows closed,” the release stated.

Swartley said the dense smoke has also prevented crews from getting an exact estimate of how many acres are affected, and the current tally may be an underestimation.

“The problem with that is we haven’t been able to get eyes on the fire perimeter because of the dense smoke,” he said. “It has grown rapidly.”

The Whipping Creek Fire is the largest of three wildfires blazing within the state. A fire in Brunswick County has burned about 1,600 acres and a fire near the North Carolina-Tennessee border has burned about 800 acres, according to reports from The Associated Press.

Despite the Whipping Creek Fire’s size, Swartley said there are no direct threats to communities, as the fire is mostly affecting uninhabited forestland.

He said crews are operating all day, and burnout-operation groups are sent out at night to help them better control the blaze.

Sarah Hodges Stalls, public information officer at Beaufort County Schools, said there are still no plans to close schools due to air quality.