Race for the river 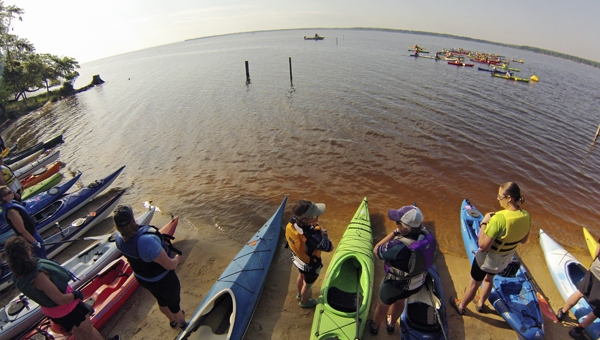 DAILY NEWS
ONE OF A KIND: “Fitness” magazine once called Sound Rivers’ Race for the River Kayakalon a “race that shouldn’t be missed.” Consisting of three legs — kayaking, cycling and running — the race will be held at Goose Creek State Park on Saturday. Pictured, past Kayakalon-ers prepare to head out into the Pamlico River.

Kayakers, cyclists and runners will take over Goose Creek State Park on Saturday for the 10th annual Race for the River Kayakalon. The race starts with a 1.5-mile kayak paddle on the Pamlico River, followed by a 15-mile bike ride on surrounding country roads and finishes with a 3-mile run on shaded trails within the park. According to Sound Rivers riverkeeper Heather Jacobs Deck, many Kayakalon participants do all three legs; others register as a team, with each team member taking a leg of the race.

Originally started by Liane Harsh of Inner Banks Outfitters in Washington, the race continues to grow as it heads into its 10th year.

“They did it the first year, and we kind of partnered with them and took over duties as the event sort of grew,” Deck said, adding that the Kayakalon not only serves as a small fundraiser for Sound Rivers, but as a way to highlight Goose Creek State Park and all it has to offer visitors.

The race starts at 9 a.m., and Deck said that over the years, both the crowd of participants and of observers has grown.

“I think the best part is the beginning, when all the kayaks are in the water at the same time,” Deck said.

More than 100 participants registered for this year’s event, she said.

For Race for the River Kayakalon results and photos, see the sports page in the Tuesday edition of the Washington Daily News.