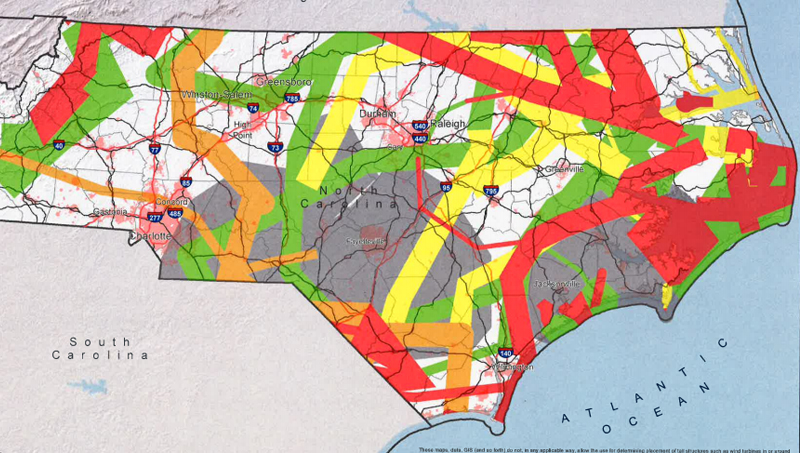 ON THE MAP: A new Senate bill prohibits wind farms on land in the flight paths of military training, which includes all of Beaufort County, as can be seen on the grayed-out areas of the map.

Last week, the North Carolina Senate passed a bill that prevents wind farms from being built in most of central and eastern North Carolina. Supporters of the bill say the ban is a necessity in order to protect airspace that the military uses in its training missions. If one looks at a map of flight paths used in training by military facilities in eastern North Carolina, all of Beaufort County falls under the “wind farms prohibited” zone.

Wind farms have been an issue between companies looking to lease land to install them, landowners looking to lease land to those companies, and the military, which is looking to justify the cost and continued operations of its training facilities in eastern North Carolina, for several years. With this bill, the Senate — and the House, should its members vote in favor of it — takes the decision to lease fallow land to wind farm companies away from landowners, and makes it impossible for local governments to create their own ordinances about wind farms.

This shouldn’t come as a surprise. The current General Assembly has made a habit of taking away local governments’ ability to make their own regulations. In the past several years, legislators have made it impossible for local governments to create ordinances controlling fracking research, development and practice; taken away local governments’ ability to levy a business privilege tax, a major source of funding for many municipalities, leaving holes millions of dollars deep in local government budgets; created a law that says no stormwater program in the state can be more restrictive than what’s required by the state; taken away any ability to locally raise minimum wage above the state-mandated $7.25 per hour; removed any ability for cities, counties and towns to make their own ordinances regarding discrimination, and more.

The understanding is that the General Assembly is paving the way for the proliferation of business in the state by making all of North Carolina subject to the same rules and regulations, so as to not trip up business ventures in the state with pesky local ordinances.

In the process, legislators are refusing to acknowledge that some of their laws don’t fit every town, city or county, much in the way that one shoe won’t fit all feet. In the process, they are slowly but surely divesting local governments of power.

In the process, they are refusing to acknowledge that sometimes locals — the people who live in a place, eat, work, breathe the air and swim the river — know what’s better for them than those a safe 100 miles away in Raleigh.

This time it’s wind farms. Who knows what will be next?

Hot cars are no place for children or pets