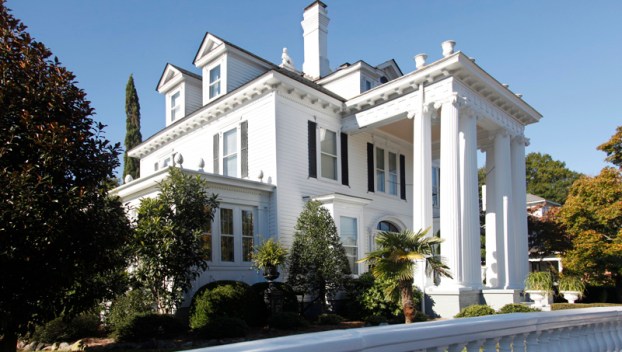 DAILY NEWS A WALK DOWNTOWN: There are plenty of sights to be seen in the eastern district of Washington’s Historic Walking Tour, including the Neo-Classical Revival splendor of the Stephen C. Bragaw House (pictured), St. Peter’s Episcopal Church, and the Neo-Classical sandstone and Flemish bond brick of the Municipal Building.

The Heart of the Inner Banks — that’s how visitors know Washington and greater Beaufort County. The main draws are, and always have been, the rivers here and the many opportunities to take a swim, a boat ride, do some fishing or watch a sunset over the water. Friends, family and tourists may come for a river adventure, but in those hours off the water, in the cool of evening, the thing to do is take a walk.

Washington has a long history and as the centuries have passed, many pieces of that history have disappeared. Others remain. And one can see them all on a leisurely stroll downtown.

Drive down any downtown street, and one will see markers pointing out historically significant properties: homes, churches, courthouses and more. While Washington Tourism Development Authority printed beautifully bound guides for the walking tour, they proved so popular they ran out and it’s in the works to have them reprinted. The walking tour is divided into three districts; the homes and other structures listed here are located in the eastern historical district. For those in the mood for a stroll down Washington’s memory lane, the following are highlights of the tour. Happy walking!

(This is the final installment of a three-part series on Washington’s historic walking tour.)

Built in 1913 as a U.S. Post Office and courthouse, Washington’s current City Hall is a three-story structure of made of sandstone and brick laid in Flemish bond, with Corinthian columns framing the second story, an arched entrance and elaborate ornamental trim. Designed by architect James Knox Taylor, the building is an wonderful example of neo-classical revival architecture.

This home is the only truly neo-classical revival style home in Washington’s historic district. Its monumental portico with six two-story columns makes it distinctive. Built for Washington attorney Samuel Potts, it was builder J.W. Jones’ first job as a contactor. Jones later became known for the sturdy homes he built, along with his use of columns.

A hipped roof, an original pressed-tin shingle roof and a widow’s walk with a view of the Pamlico River make this Colonial Revival style frame home notable. The home was built for George H. Paul, a clerk of superior court, and was acquired shortly after by Solomon Phillip Willis, who ran a wholesale fish market at the foot of Market Street. The home was restored in the 1980s.

The Armory, no date

The former Washington Armory was built with Works Progress Administration funding and served as a North Carolina National Guard Armory until a new one was built. Older generations can remember young men starting their nighttime marches from the armory, to march through Washington Park, in preparation to be shipped off to war during the early 1940s. In 1997, the armory underwent restoration and now boasts apartments with river views.

Built by Moss Planing Mill founder Beverly Moss for his mother and three unmarried sisters, it is rumored that Mr. Moss saved his best timber for construction of this East Main Street home.

Now a popular bed and breakfast, Pamlico House Bed & Breakfast, St. Peter’s church rectory is a large Colonial Revival frame house. The two-story, hip roofed home features a spacious wrap-around porch with Ionic columns. The home has alternated between a private residence and bed and breakfast for the past several decades.

Though to have been built with wood left over from a local shipyard, the exact date of construction of the Thomas House is unknown. An unusual style, this 1 1/2-story frame house was owned by the Thomas family and, later, the Carter family. A community well was once located in East Second Street, which is likely why the home sits at the back of the lot.

First a Federal battery during the Civil War, this island just off the Washington waterfront was later established by the Fowle brothers as a shipbuilding yard. After that, it housed kilns that incinerated oyster shells to produce lime — the kilns’ smokestacks looked like the turrets of a castle, hence the name. Still later, a brothel, with a proprietress known as the “Queen of Castle Island,” was located on the island. Now, boaters, kayakers and paddleboarders gather on its sandbars during the summer months.

It’s not historical, but the N.C. Estuarium is a notable stopping point on the walking tour. An educational center dedicated to the study of estuarine systems and their fragile ecosystems, the museum has many interactive exhibits and hosts events throughout the year. Regional artifacts, work by local artists, educational programming, boat tours of the river and more make up this museum like no other in the world.

One of the oldest homes in Washington, Federal troops used it, along with neighboring Myers House, as offices and quarters during the Civil War. When Union gunboats shelled the town, a cannon ball penetrated the home. After the war, a cannonball was placed in the clapboard siding as a symbol of local defiance of occupation and reconstruction—and it’s still there today. Built for Daniel Gould Marsh, who along with brother Jonathan Marsh, were involved in a variety of enterprises from lumber and grain to shipping and naval stores.

Now the Gaskins and Gaskins law firm, this Federal home has a long history—the longest in Washington. Built by the Myers family, who were merchants and shipbuilders, their shipyard was adjacent to the house. Once said to have tunnels from the cellar to the Pamlico River, the home stayed in the Myers family for 150 years. Witch bottles, thought to ward off evil, found buried in the cellar indicate the superstitious nature of its long past residents.

An English sea captain named Lockwood Hyatt built this house with interior walls that slant toward the river and a living room shaped like a ship. Though built in Federal style, the exterior has been altered to incorporate a front porch. The ghost of Captain Hyatt is said to reside in the third floor of this home, watching for ships coming up the river.

A Greek-key motif, transom and sidelights surround the front door of this distinctive two-story Greek Revival home. A shipping family, John Myers & Sons traded extensively with northern states and had a lucrative river trade to Greenville and Tarboro. The home was owned by the Myers family for 180 years, until the death of Helen Myers in 2012.

Frank Bryan, a prominent businessman who was also involved with the Home Guard organized during World War I built this home in the late 19th century. With turned wood porch posts and elaborate fretwork, the home underwent extensive renovation in 2015.

Washington’s founder, Col. James Bonner, is buried in in the southwest corner of the churchyard. The church was built after the burning of Washington 1864, when the original church—built in 1822—was destroyed by fire. Legend has it that St. Peter’s church bell tolled its own death knell during the fire.

The Heart of the Inner Banks — that’s how visitors know Washington and greater Beaufort County. The main draws are,... read more