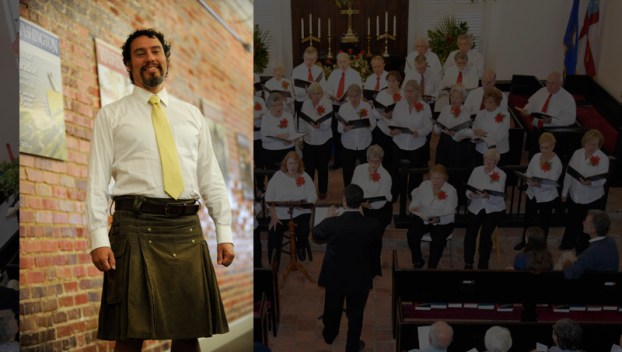 He’s a baritone, a music and voice educator, wears stylish kilts and five-toed shoes. Stephen Brand is not your average chorale conductor.

Brand took over the role of Beaufort County Choral Society director last year. Heading into his second season, he’s looking to keep the transformation he started last year in the choral society happening this year, by bringing in more people, and further inspiring BCCS members to grow in their voices.

When husband and wife, and director and accompanist, Tom and Melissa Feller had to step down from BCCS last year, the search was on for a new director, according to longtime choral society member Judi Hickson. Though several people were interviewed for the job, Brand’s background in education, vocal performance and more led the group to bring him on. It’s a decision BCCS members do not regret, Hickson said.

“He has just been, for us, a godsend, and he’s given us the kind of energy that we need,” Hickson said. “He comes in and he gives his all. He will kid with us a little bit, but he is right there on task. He knows what he wants to accomplish.”

He accomplishes that, Hickson said, by encouraging singers to stretch and learn and not be complacent.

“He brings youth and enthusiasm, from my perspective,” said Wendy Thienpont, a BCCS member since 1979. “A willingness to try where there wasn’t before.”

As with any choir, Brand has faced challenges: a little resistance to branching out to different genres and languages, as well as pressing singers to see the potential in their own voices, but it’s his role to get his singers to move beyond their perceived limitations.

“Basically, (it’s) getting people confident in their own voice, to be able to sing out. The desire is there — just to encourage them, promoting them to say you can do this,” Brand said. “I’m the one up there waving my arms around. They’re the ones singing the music. I consider myself more a music guide than a director.”

Brand said he draws on lessons learned during the work he does with Love Joy Music, an early childhood music education business he operates with his wife, Erin.

He said singing with the choral society is just as much about how people feel when they’re rehearsing and how they feel when they walk out of a rehearsal as the singing itself.

“I try to make it fun; try to make it engaging, high energy, but very relaxed and informal, so they feel like there’s a sense of community,” Brand said. “We’re building a community.”

It’s a community he wants to share by inviting more people to participate, he said.

“Every choir can use more guys,” Brand said. “I would love to see some of the younger generations come and participate. … I love doing (songs in) different languages and would love to bring people in from all walks of life. Music is universal, and I would like to see just everybody (there).”

Building the choral community will take new and different forms this season: in December, BCCS will host a sing-along of Handel’s Messiah at the Turnage Theatre in Washington.

“It’s a one-day event. People come in, rehearse for a couple hours, take a dinner break and then we perform. The thought is bringing the community out to sing with us, to see how we’re singing,” Brand said.

Singers are welcome to simply show up for the next summer rehearsal, which will be held at 7 p.m. on Aug. 16 at First Presbyterian Church in Washington. For more information about how to become a member, call Judi Hickson at 252-974-1033.

A new book by a Washington author take a close look at some of the city’s unique, famous and notorious... read more