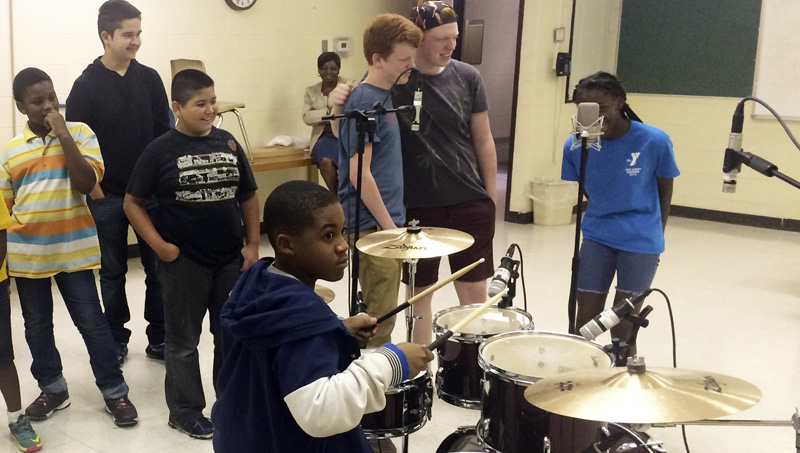 AURORA — S.W. Snowden Elementary School has a new anthem, and it comes straight from the students.

“Snowden Strong” is a theme song that highlights the close-knit group of students and staff at the school and takes a cue from its new social media campaign #SnowdenStrong, according to Michelle Garrish, who headed up the songwriting process.

Garrish recently graduated from East Carolina University, and to complete her school credits, she was required to lead a summer project of her choice.

Garrish said she already knew some staff members at S.W. Snowden, and the school recently received $20,000 in grant money to fund equipment for a recording studio — which until this summer had gone largely unused.

The pieces began to fall into place.

“This is an interesting resource for such a small school,” Garrish said. “They’re really just trying to build the morale at that school.”

S.W. Snowden already had a group of students participating in its SPLASH summer program, so Garrish coordinated with SPLASH Director Ben Taylor to enlist the group’s help in creating an anthem.

Over the course of three weeks, Garrish and about 10 students came up with a rhythm, turning it into a full song and adding the lyrics.

Garrish also enlisted the help of her two sons, Connor and Kendall, who formerly played in the local band K-OS.

“I’m a big advocate of peer-to-peer things,” she said. “They just kind of lit up when my boys came in.”

“Our students thoroughly enjoyed the creative and technical process of writing, singing and recording this song for our school. We look forward to sharing the final product with the community,” Principal Catherine Tahaney said.

Each of the participating students will also receive a copy of the new song, Garrish added.

“Aurora is a very small town, and it seems like it just keeps getting smaller,” she said. “They just wanted to get that out there, as far as what they’ve got there in their school.”

“It just helps them take pride in their school.”