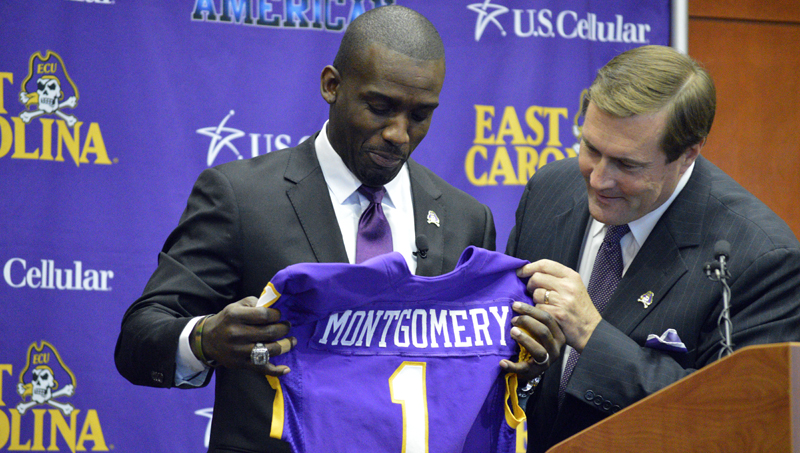 East Carolina athletic director Jeff Compher presents first-year football coach Scottie Montgomery with his own Pirates jersey at the press conference announcing his hiring. Montgomery said the butterflies began on that day, but he’s excited to enter Dowdy-Ficklen Stadium for the first time on Saturday.

GREENVILLE — For first-year head coach Scottie Montgomery, a lot of the offseason has been about learning on the fly. The same will likely be said Saturday when the Pirates open the season against Western Carolina.

Equal parts nervous and excited to run out of Dowdy-Ficklen’s purple haze, Montgomery admitted that even though kickoff is fast approaching, he’s still trying to find a solid game-day routine.

“I don’t have a (final) routine figured out yet,” he said at Monday’s press conference. “I wish I was that good, but every 20 to 30 minutes there’s a new part of the routine added to it. I have a great routine that I put together five years ago for when I became a head coach but unfortunately it gets a curveball thrown into it every now and then.”

The well-traveled coach spent Sundays in the National Football League as both a player and a coach, as well as extensive time in the Atlantic Coast Conference in the same positions. He stood on the field or on the sideline of football stadiums across the country, in front of crowds that near 100,000. But still, all the experience in the world won’t help Montgomery keep the butterflies away come Saturday.

“I think (the butterflies) kicked in Dec. 13,” Montgomery said, referring to when he was hired. “This is what we live for as coaches and as competitors. There’s nothing like the focus that goes into trying to get yourself prepared for spring ball and summer workouts and fall camp, but nothing is like this week.”

Saturday’s game will be Montgomery’s first as a head coach at any level. He has the unique opportunity to follow one of East Carolina’s most enigmatic and popular head coaches.

Fans remember Ruffin McNeill running out of the purple haze, jumping, hollering and setting the emotional tone. Will Montgomery emulate McNeill’s emotion or will he take a more stoic approach to the field entrance?

“I’m not going to hide (emotion) at all,” he said. “This is something that I’ve dreamed about. Being here is something I could have never dreamed would be this good from a standpoint of having the fan culture, running out on the field with your football team. It’s going to be special. Our guys know that I’m excited.”

Perhaps not even Montgomery has a clear understanding of how the Saturday routine will shake out. Will it be a quiet, business-like presence or a rousing, pregame speech? Should emotion take center stage or should the game be treated like any other? These are all questions Montgomery will have to face week after week. But for now, the head coach is content with playing it by ear.

“We’re trying to figure out the best way to make sure out team is ready and also that our fan base gets what they deserve and that our coaches get what they deserve because they’re energized and ready to go,” Montgomery said. “So it’s easy for me to adjust. I’d like that routine to get tighter and tighter as the year goes on. That’s good for me and my mentality, but, right now, it’s a learning process to be quite honest with you.”