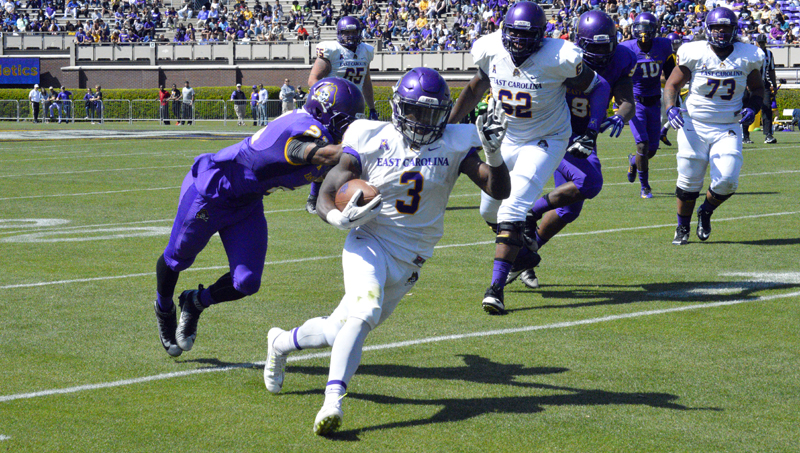 Pirate running back Anthony Scott gets to the outside during the team’s spring scrimmage. ECU’s deep backfield is one of the things to look out for on Saturday when the season opens in Dowdy-Ficklen Stadium.

GREENVILLE — Scottie Montgomery will take the field for the first time as a head coach for East Carolina Saturday. FCS squad Western Carolina will visit Dowdy-Ficklen Stadium to kick off the 2016 football season.

Montgomery, who previously served as Duke’s offensive coordinator and assistant head coach under David Cutcliffe, said the anticipation has been building for him since he first took over almost 10 months ago.

“This is what we live for as coaches and competitors,” Montgomery said at his first Monday press conference as the headman. “There is nothing like the focus that goes into trying to get yourself prepared for spring ball, summer workouts and fall camp, but there is nothing like this week.”

The Catamounts are no slouch, competing in the Southern Conference with the likes of highly ranked Chattanooga. Western is familiar with playing top-tier FBS talent as it faced off with Tennessee and Texas A&M last season.

This season will be bookended with FBS teams for Western in 2016 as it closes its regular season against South Carolina in November.

The Catamounts will try to use speed from their quarterback and depth at running back to exploit the ECU defense. They will run a zone-read option and a triple option attack against the Pirates on Saturday. As a sophomore in 2015, running back Detrez Newsome led the team with 1,109 yards and nine touchdowns on the season.

“Also, at running back, (Newsome), every stadium that he shows up to on Saturday afternoons, he plays well,” Montgomery said. “He’s a hard tackle. He’s quick. Not only is he quick, but he’s a guy that if he gets out two-three yards in front of you, he can take it the distance.”

They will have to deal with the loss of quarterback Troy Mitchell for the first time Saturday. Montgomery said he is aware of the situation and knows head coach Mark Speir is still hosting a position battle. Both junior Wes Holcombe and redshirt freshman Tyrie Adams will likely see reps Saturday and the game could serve as important proving ground for the quarterbacks.

“A lot of people are always fearful when battles come down to trying to figure out who your quarterback is going to be, but both of those quarterbacks are capable,” Montgomery said. “The challenge it presents is that they are different at the position.”

The Pirates will have some challenges of their own headed into the first game of the season. Starting left tackle Messiah Rice will serve a one-game, team-issued suspension to start the season. Junior Justin Sandifer will start in his place. Montgomery said he trusts Sandifer, who will play a key role in protecting Philip Nelson’s blind side.

Nelson will be playing in his first game since December of 2013 where his Minnesota Golden Gophers fell to Syracuse in the Texas Bowl. Nelson threw seven passes in the game and completed two for 18 yards.

Quarterback Phillip Nelson hands off to running back Derrell Scott in ECU’s spring scrimmage. Nelson will see live-action football for the first time since late 2013 on Saturday in Dowdy-Ficklen Stadium. Scott, also a transfer, has been waiting for this moment, too.

In that season, Nelson threw for 1,306 yards with nine touchdowns and six interceptions. He also rushed for six touchdowns in his sophomore season. Almost three years later, a brief and notorious stint at Rutgers, Nelson is ready to unleash all that has been bottled up since his last throw in the dark-maroon Minnesota jersey.

Nelson said despite the coaching change and playbook differences, his head start with the program last fall helped get him comfortable with his teammates and make him ready for his last go-around in college football.

“What helped me the most was getting to know the guys,” Nelson said. “I love these guys. I love this team. I’ve never been around a brotherhood like this before and really just being here this long is kind of what helped me.”

Tropical Storm Hermine will pass through Greenville Saturday morning and will likely affect the field condition at Dowdy-Ficklen, however rain is not expected during the game.