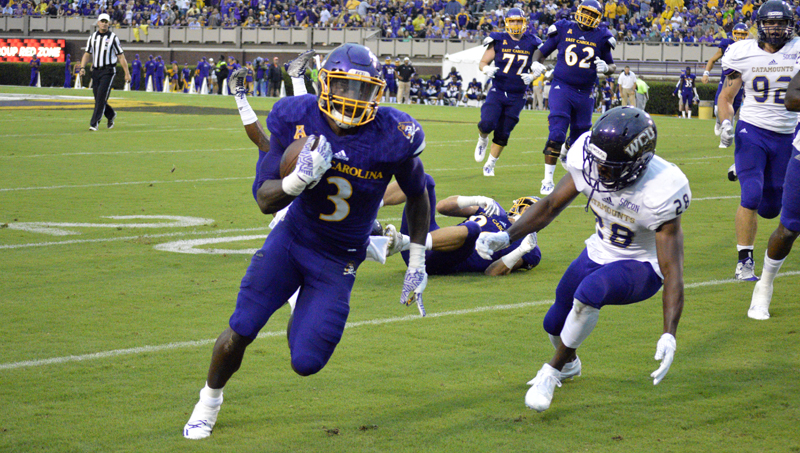 Anthony Scott rips off a run along the left sideline against Western Carolina. He was a highlight in ECU’s rout of the Catamounts. He amassed 210 yards of total offense and scored thrice.

Running out through the familiar purple haze, the new-look Pirates dominated from the opening moments of the game. Safety Travon Simmons intercepted Western’s Tyree Adams deep in Pirate territory before the offense promptly marched down the field. It capitalized when Nelson ran in ECU’s first touchdown of 2016.

Despite pushing the Pirates back on their heels during the opening drive before the interception, the Catamounts failed to mount much of an attack for the rest of the game. They tallied 320 total yards of offense and completed just 12 passes.

But it was the Pirate offense that ultimately stole the show thanks to Nelson’s strong arm. The senior signal caller found receiver Quay Johnson on a four-yard fade early in the second quarter to give the Pirates a 17-0 lead. Nelson connected on 28-of-32 passes for 398 yards and found the end zone six times, including the rushing touchdown. For the beleaguered Rutgers transfer and former Minnesota Gopher, it was a long-awaited moment.

“With the offense we have and the weapons, as a quarterback you just have to be confident,” Nelson said. “We expected to do this tonight and we’re not satisfied.”

Senior receiver Zay Jones helped Nelson in the passing game by snagging 10 catches for 180 yards and a touchdown while running back Anthony Scott supplemented the attack with 210 yards of total offense and three touchdowns of his own. In total, the Pirates racked up 688 yards — the third most yards in program history.

Philip Nelson opts to run the ball himself. He ran in ECU’s first touchdown of the season early on against Western Carolina.

“Anthony was hot,” Montgomery said. “He was running it, he was catching it, he was doing a great job in protection. I’m not going to give him too much sugar yet but I’m going to say he might have had one of the best games from a mental error standpoint that I’ve seen in a (running) back.”

The new era brought new questions from a personnel standpoint. Scott stepped up the lead a crowded backfield, Nelson showed off his deep-ball accuracy while avoiding turnovers and the offensive line stymied the Catamounts’ pass rush.

But it was the utilization of James Summers that stands out amongst the crowd.

Summers was used in a variety of ways for the Pirates, lining up as a running back, receiver and quarterback through the course of the game. He found the most success on the ground, running from behind center through a read-option attack. His 95 rushing yards were second only to Scott.

“James Summers, where do you want to play him, that’s the question,” Montgomery said. “We have to continue to work to make sure to get him the football but really good football at that position.”

Defensively, Simmons’ early interception set the tone. Western Carolina found the end zone one time thanks to a 13-yard touchdown run by Detrez Newsome, following a shanked punt by ECU’s Worth Gregory in the second quarter. Outside of the lone score, ECU worked hard to bottle up dual-threat quarterback Adams, limiting big plays and stopping the read-option.

“The coaches stressed that he’s a running quarterback, so when scrambles we have to lock on to a wide receiver, we have to gang tackle, we have to set our feet because obviously he’s shifty,” Simmons said of Adams.

The rout marked the 25th straight victory over a FCS opponent and the 11th opening-game win in the last 12 tries. But it doesn’t stop there. The Pirates earned a convincing win to start the season and answered questions.

The real test comes next Saturday against rival NC State.