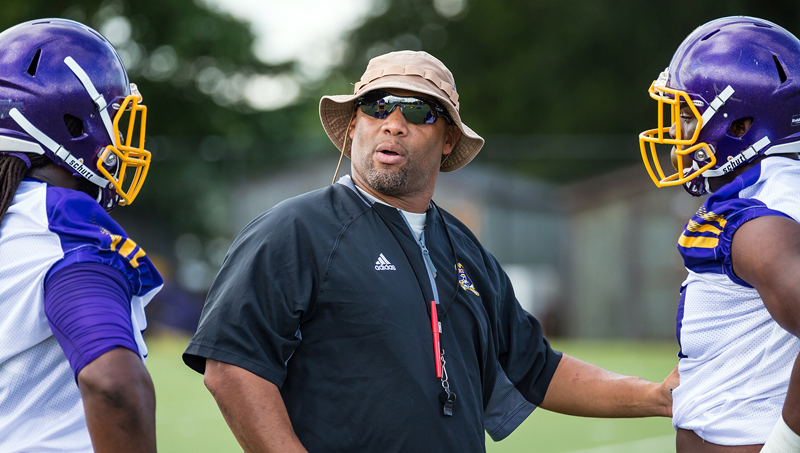 ECU defensive line coach Deke Adams offers some advice to two of his players. Adams last coached under Steve Spurrier at South Carolina, so he is able to provide the Pirates with special insight ahead of Saturday’s game in Columbia.

GREENVILLE — The x-factor in Saturday’s clash between East Carolina and South Carolina won’t make a throw, break off a big run or register a crucial tackle. Instead, he’ll be standing on the sideline coaching the Pirates defensive line.

Deke Adams is less than a year removed from the Gamecocks’ coaching staff where he coached the defensive line for three seasons before Steve Spurrier and his staff were replaced.

He’ll return to Williams-Brice Stadium in just a few days, lining up on the opposing sideline. Still though, it’ll be a homecoming of sorts for Adams, as his family still resides near Columbia.

“The main thing is that my family is still down there so it’ll be great to see my family,” Adams said. “But the biggest part for us is that we’re going down to handle business.”

Perhaps the biggest asset Adams can provide the Pirates this week is his insight on strengths and weaknesses of South Carolina’s personnel — specifically on the defensive line.

“We had a personnel meeting with Deke on both sides of the ball where I sat in, and I got my notes from that personnel meeting,” head coach Scottie Montgomery said. “He knows a lot about those kids. He knows what they play for, how they play and what positions that they feel more comfortable at, so we got a great amount of intel from Deke. We’re really happy he’s on our staff.”

Though Montgomery admitted Adams’ is a key figure in game planning, the defensive coach was much more coy about the role he’s playing this week, calling it simply a business trip.

“They’re a good football team, they have a good coaching staff,” Adams said. “For us, we’re going to just prepare our kids the same way each and every week. We’re going down to play a great team in a great environment so it’ll be fun.

Senior defensive tackle Demetri McGill hopes to perhaps follow in the path of some of Adams’ pupils that made the jump to the NFL. For now, the 6-foot-1 lineman is leaning on his coach’s experience to help him overcome the Southeastern Conference size that the Gamecocks boast.

“It’s a big advantage,” McGill said. “He knows the ins and outs. He’s watched the offensive line for two years and he knows what they can do and what they can’t do.”

Adams, who oversaw All-Americans Jadeveon Clowney and Kelcy Quarles while in Columbia, will get to see a handful of former players during the return trip. It’s a moment that he admits will be bittersweet.

“I figured out a long time ago that there’s more to this business than just the game of football,” he said. “I love those kids and I look forward to seeing those kids and hugging some of them and battling against them.”