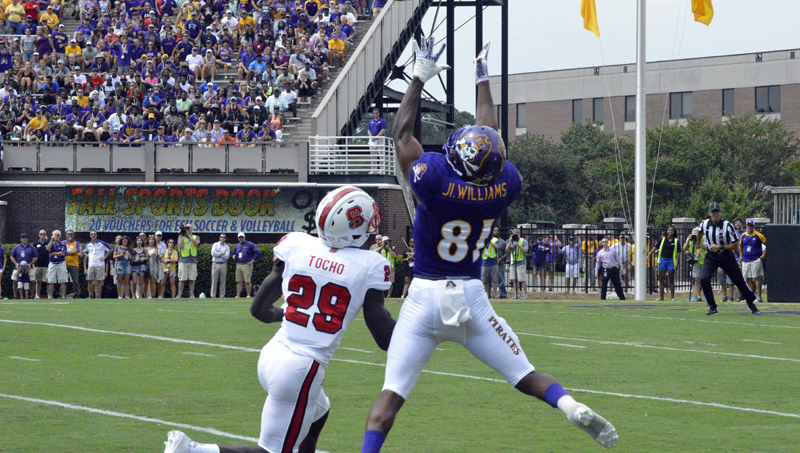 ECU receiver and former Pam Pack standout Jimmy Williams leaps up to haul in a pass early on in last Saturday’s game against N.C. State. Williams and the Pirates hope to improve to 3-0 by knocking off South Carolina.

COLUMBIA, S.C. — It was 1976 when East Carolina secondary coach Rick Smith first visited Williams-Brice Stadium. As a member of Georgia Tech’s staff, Smith and the Yellow Jackets fell to the Gamecocks, 27-17.

Now, 40 years and six days later, Smith will enter the same building and look to help his Pirates’ take down a Southeastern Conference opponent for the first time since 1999.

“It’s changed a lot in those [40] years,” Smith said. “I went there several times when I was at Kentucky. It is so loud there you cannot hear. When you’re down there with the double headset on, you’ve got earmuffs on and somebody’s talking to you, you cannot hear what the coordinator is saying in the press box.”

Smith said Williams-Brice is one of the three loudest stadiums he has visited, also mentioning Tennessee, Legion Field (where the Iron Bowl was held).

Smith isn’t the only member of ECU’s coaching staff with game day experience in Williams-Brice.

Defensive line coach Deke Adams held the same position at South Carolina last year. Adams said he knows the offense and defense of his former team well. He pointed to quarterback Perry Orth and wide receiver Deebo Samuel as players who took big strides between last year and the start of this season.

Adams’ main point this week at practice, however, was the need to improve the pass rush game for the Pirates.

“We’ve got to be able to generate more of a pass rush,” Adams said Tuesday. “That’s been a problem. That’s one of the issues we knew coming in and those are things we’re continuing to work on daily to get better.”

Again, the Pirates will have to prepare for a two-quarterback attack from the Gamecocks. Orth, a fifth-year senior, and true freshman Brandon McIlwain each pose threats for South Carolina’s offense.

“Having two quarterbacks to prepare for, it takes more time,” outside linebacker Dayon Pratt said. “You spend more time in the film room and spending more time alone, studying that tight end, studying the tackle and the quarterback and the tendencies they have. It all just comes down to preparation.”

Dayon Pratt gets in the backfield for a big tackle against the Wolfpack. He and his defensive teammates have been spending plenty of time studying film to prepare for the two Gamecock quarterbacks.

Smith stressed the importance of facing two dynamic quarterbacks in the preseason between Philip Nelson and James Summers. He said the need to prepare for multiple quarterbacks leading up the season has made the transition easier when planning for regular season games.

“It’s been great for (the defense) to go against Nelson and then have to turn around and go against Summers,” Smith said. “It’s just like we tell our kids, ‘If (McIlwain) comes in the game, it’s James Summers. If (Orth) is in there, it’s Philip Nelson.’ They both can pass and they both can run. It’s just one’s a little better of a passer and the other is a little better runner.”

Smith highlighted the importance of containing the Gamecocks’ two strong tight ends. Hayden Hurst and Jacob August have combined for 95 of the team’s receiving yards so for this season. Hurst has hauled in a team-high 10 passes for 85 yards while August has one for 10 yards.

Last year, Smith and the Pirates faced a similar threat against Virginia Tech. The Hokies had tight ends Bucky Hodges and Ryan Malleck. In an eventual win for ECU, the duo combined for 94 yards on seven receptions and a touchdown.

Smith and his secondary may have to put out a stronger showing to stop the Gamecocks attack. The game will kick off at 4 p.m. and will be broadcast on the SEC Network.