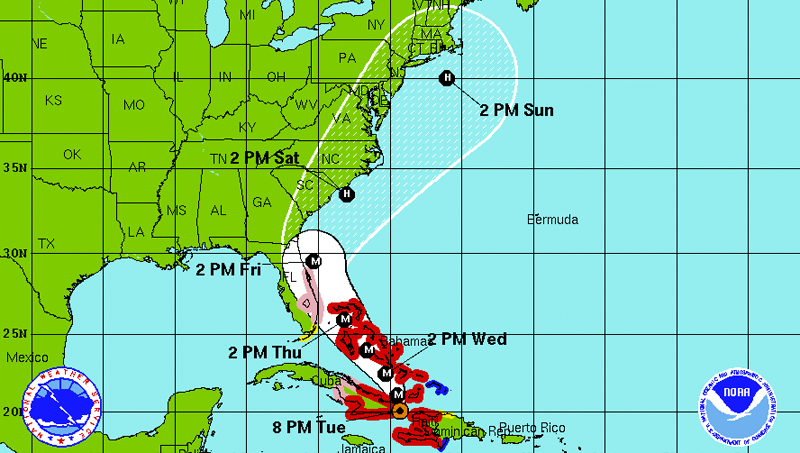 Hovering over Haiti, Hurricane Matthew continues to move northward through the Caribbean.

According to the latest forecasts, Matthew is set to pass over eastern North Carolina later than originally thought. Early predictions on Tuesday placed the eye of the storm over this area Saturday morning, but it is now expected to pass over Saturday afternoon.

“On Wednesday, only residents, property owners, vendors, and critical infrastructure providers with Ocracoke re-entry documentation will be allowed on ferries inbound to Ocracoke. On Thursday, only emergency personnel and vendors will be allowed onto the island,” a press release stated. “All ferry service to and from Ocracoke will end Thursday night at midnight, to allow all ferries and ferry personnel to find safe harbor from the storm.”

Hurricane Matthew is making its way for the Bahamas, and is expected to make landfall there Wednesday afternoon.

As of Tuesday evening, the storm was moving north at 9 mph, with maximum sustained winds of 140 mph.

Beaufort County Emergency Management Services is scheduled to host a conference call at 6 p.m. to determine the latest information on Matthew and what to expect this weekend.

The National Weather Service is warning residents that a storm’s effects can extend hundreds of miles past the eye of the hurricane.

Hurricane Matthew continues to barrel through the Caribbean at 10 mph as of Tuesday afternoon.

The National Weather Service has issued a hurricane watch for the eastern coast of Florida as the storm travels northward, as well as small craft advisories along the coast of the Carolinas.

Hurricane Matthew is wreaking havoc in the Caribbean as a Category 4 storm. It is expected to move out of that area by Thursday and continue traveling up the East Coast.

Emergency officials in Beaufort County are keeping close watch of Matthew, and said there could potentially be storm surges of 5-7 feet, with water levels up by 3-5 feet. However, these are estimates, and the National Weather Service will not know for sure until later in the week.

As Hurricane Matthew barrels through Haiti and Jamaica, leaving destruction and some fatalities in its path, officials in eastern North Carolina are keeping close watch.

According to the latest forecasts, Matthew is set to hit Haiti today as a Category 4 storm, traveling up toward Florida by Thursday and weakening to a Category 3, and then hitting eastern North Carolina as a Category 2 by the weekend.

As of 5 p.m. Monday, the storm was traveling north at 6 mph with maximum sustained winds of 145 mph and winds gusts up to 160 mph.

Merrell said it is hard to tell the extent of Matthew’s effects on the East Coast as of now, including how close it will track to the coast, but residents should be vigilant.

“It’s still to be determined,” Merrell said. “It possibly could still strengthen to a higher category.”

“The better prepared folks are, the safer they will be should Hurricane Matthew impact our coastline,” Barry Porter, regional chief executive officer of the eastern N.C. Red Cross, stated in a press release.

If Hurricane Matthew continues along its predicted path, hitting the coast as a Category 2, residents should prepare for winds between 96-110 mph, coupled with heavy rains and flooding.