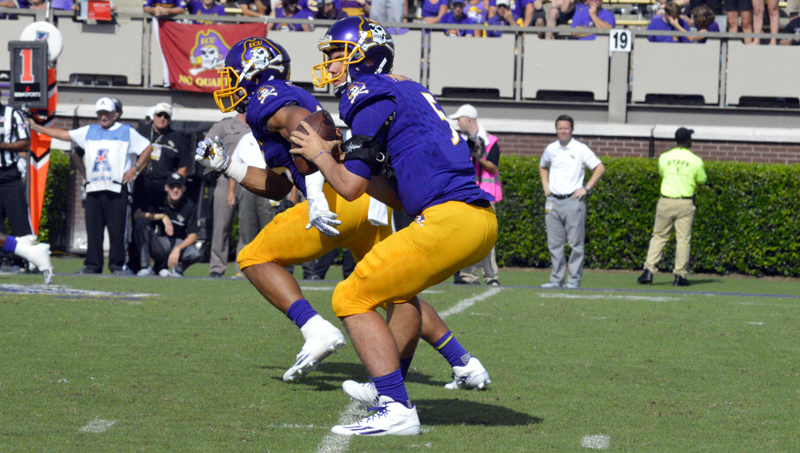 Gardner Minshew takes a snap after coming in for Philip Nelson against Central Florida. The sophomore signal caller again stepped in against Tulsa, and performed admirably.

Senior graduate transfer Philip Nelson was benched during Saturday’s loss to Tulsa, but head coach Scottie Montgomery pointed to a nagging shoulder injury that limited him to just a single day of practice.

Though not listed on this week’s injury report, there’s no guarantee that a mostly healthy Nelson would get the nod over sophomore Gardner Minshew, who notched 29-of-49, 336-yard performance against the Golden Hurricane in relief.

Montgomery said at Monday’s press conference he was close to giving Minshew the start, but Nelson’s Friday practice convinced him otherwise.

“We were close,” he said. “It came down to Philip having a really, really good Friday and feeling good. Moving forward we’ll be in a similar situation and he’s going to have to be able to practice, especially with the performance Gardner was able to put in. He’s been pretty good every time that he’s come in, but also the timing in what we’re doing. We were close, but not close enough to make the change.”

That could change this week, as Nelson once again was victim of dismal pass protection. With an already-banged-up shoulder and Minshew’s most recent performance, which highlighted his ability to extend plays in the face of pressure, Montgomery may err on the side of caution and avoid further injury against Southern Methodist this week.

“Pocket poise is the biggest thing,” Montgomery said. “Right now we’re going to have to have a lot of pocket poise. We have some offensive line limitations and it’s not always going to be clean. So the guy that can be poised and step up into the pocket, as bad as that may sound, and create some scrambling towards the line of scrimmage is going to have a better opportunity.”

However, Montgomery’s words fail to paint a picture in which Nelson starts if his shoulder isn’t 100 percent. That much was proven when he pulled Nelson late in the second quarter against Tulsa.

“We’ve seen some improvement (at quarterback) even when the starter’s not in there,” Montgomery said. “At times it’s been a little bit better and other times it hasn’t been as good.”

With ECU on the brink of bowl elimination, Montgomery has no room for error when he decides which signal caller will take the field against SMU.