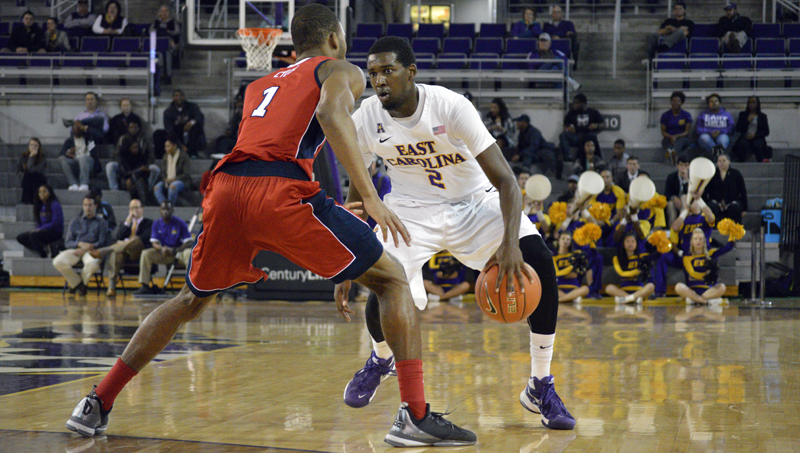 Senior Caleb White looks to dupe a Florida Atlantic defender during a game last season. White and the Pirates open their season at home versus Grambling State on Friday at 8 p.m.

GREENVILLE — The East Carolina men’s basketball is set for a season-opening rematch from 2015 as the Pirates are preparing for Grambling State for the second year in a row.

Last time around, ECU struggled in the season opener and pulled off a narrow 61-53 win. Perhaps the biggest standout performance of the game came from B.J. Tyson, though not in a positive sense.

The then-sophomore was 0-of-9 from the field and scored all six of his points from the free throw line. The team’s leading scorer didn’t reach double figures until the fifth game of the season and he took it personally. Through last season’s early struggles, he learned what it took to be truly prepared for the start of a new season.

Tyson will also be adjusting to a new position to start the season. Tyson, typically a shooting guard, will be taking the reigns of ECU’s offense in the point guard role. He has experience bringing the ball up the floor from last season, but taking it on as a full-time role to start the season is a new feeling.

ECU head coach Jeff Lebo was left to turn to Tyson to start the season after the departure of three point guards off the 2015-16 team in Prince Williams, Lance Tejada and Charles Foster.

“You’re going to see (Tyson) at (point guard) a lot,” Lebo said. “That’s a new position for him, but I know he’s excited to learn that spot and go out there and actually play it.”

Moving down low, the Pirates have a major size advantage over Grambling State, whose tallest player stands at 6-foot-9 and is followed by a pair of 6-foot-7 forwards. ECU’s new size influx will get its first chance to flex its strength against a much weaker opponent in the paint.

Wake Forest transfer and 7-foot-1 center Andre Washington will provide some depth on the inside for the Pirates. Though he didn’t have much production over his three years in Winston-Salem, Washington will find himself in a much bigger role with ECU. He averaged 1.7 points and 1.2 rebounds per game as a Demon Deacon, and racked up 57 blocks in his career.

“I can guard a 6-foot-9 guy,” Washington said before Tuesday’s practice. “I think it will be a problem for them, especially with me and Jabari (Craig) down low. My main goal out of this is just to see East Carolina win the game, though. However coach Lebo needs to draw it up for us to win, I’m ready to do it.”

Craig, a junior college transfer, was a Southern California commit out of high school before bouncing between two different junior colleges. Now the 6-foot-10 forward will look to make an impact in the paint for an ECU team that has struggled in that area.

Grambling State could pose a threat, however. The Tigers return their top four leading scorers and, should the Pirates not show up, it could be a difficult night.

Though Lebo has not concretely laid out his lineup for Friday’s contest, expect to see returners Tyson, Caleb White, Kentrell Barkley, Clarence Williams and Michel Nzege on the floor often for the Pirates.

As it is the first game of the season, Lebo will look down the bench and try to find lineups and players that may look better in different sets throughout the game.

The Pirates and Tigers will tipoff at 8 p.m. inside Minges Coliseum for the season opener before taking on North Carolina A&T Monday. Both games will be broadcast on ESPN3.