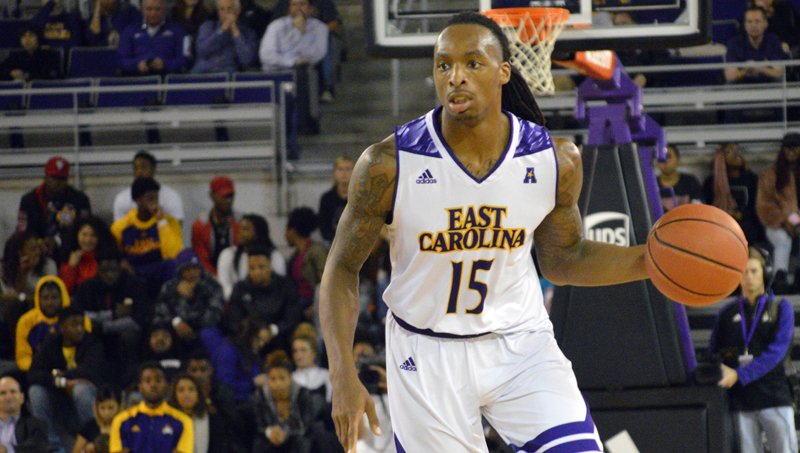 Kentrell Barkley has his eyes on a lane to the basket during a game earlier in the season. Barkley had a sloppy first half, but bounced back well to help lift ECU to a 20-point win on Tuesday.

GREENVILLE — After 13 first-half turnovers Tuesday night, the East Carolina men’s basketball team settled down and took care of business against the Hampton Pirates, 68-48.

Sophomore Kentrell Barkley had five turnovers in the first half and scored just four points. His frustrations peaked as he was called for an offensive foul and committed his fifth turnover in 11 minutes of play. He took to the bench immediately after the foul with 6:22 left in the half and he did not return.

ECU held just a two-point edge with 3:20 left in the half, but started to play its game by driving to the lane and getting to the free throw line. The Pirates entered halftime with a 36-28 advantage. They finished 15-of-22 from the line, including 7-of-8 from junior guard B.J. Tyson.

“We want to be able to get to the line and we have good drivers of the ball,” ECU head coach Jeff Lebo said after the win. “In the second half we did that much better. The ability of B.J. to get to the rim, of (Barkley) to get to the rim, and finish there through contact — that’s what they’re good at and we need more of that.”

Barkley had a strong second half as he did what Lebo wanted from him and got to the rim. He finished with 12 points, five rebounds, two assists and did not turn the ball over in the second half.

A key to ECU’s pull away in the second half was the post presence of Andre Washington. The 7-foot-1 graduate transfer continued his strong start to the season with 13 points, eight rebounds and five blocks.

After riding the bench throughout his career at Wake Forest, Washington said his final season of collegiate basketball is all about seizing the moment.

“I just like blocking shots because it’s intimidating. Now if I just put my hands up it’s in their heads,” Washington said. “I’m just going out and playing hard. I’m really thankful to be here. I’m not really worried about foul trouble. I rode the bench at Wake for like four years, so if I’m in the game I’m going to make the most of it.”

After Hampton cut ECU’s lead to just one with 13:37 left in the game, Barkley, Tyson and Washington sparked a 10-0 run as they forced turnovers to create separation. The swarming ECU defense gave Hampton problems as it shot just 18 percent from the floor in the second half.

Hampton’s offensive leader freshman Jermaine Marrow struggled as he shot 5-of-23 from the field and 0-of-8 from outside.

ECU’s own freshman Jeremy Sheppard has continued to show strides of improvement since starting his career Nov. 20. After a sluggish first appearance, Sheppard ran the offense efficiently and finished 3-of-4 from the field and had three assists. His lone turnover came after stumbling while attempting to drive the lane.

“He’s getting better and I think he’s getting more comfortable,” Lebo said. “You can see his speed and shiftiness. He missed three games and as a freshman it can take time, but I thought tonight was his best. He had only one turnover and he played well defensively.”

In the win, Caleb White became just the seventh player in ECU history to reach the 1,300-point mark. Tyson narrowly missed reaching the 1,000-point plateau by one as he missed a free throw near the end of the game.

Tyson said he was aware of the milestone as he stepped to the free throw line.

“He fluked it,” Washington joked.

“I looked up (after I hit the first free throw) and though ‘Oh only one more point,’” Tyson said. “I was nervous and I missed. I got kind of mad.”

Tyson and the rest of the ECU basketball team will be back in action in Minges Coliseum Saturday against North Carolina Central for a 5 p.m. tip off.