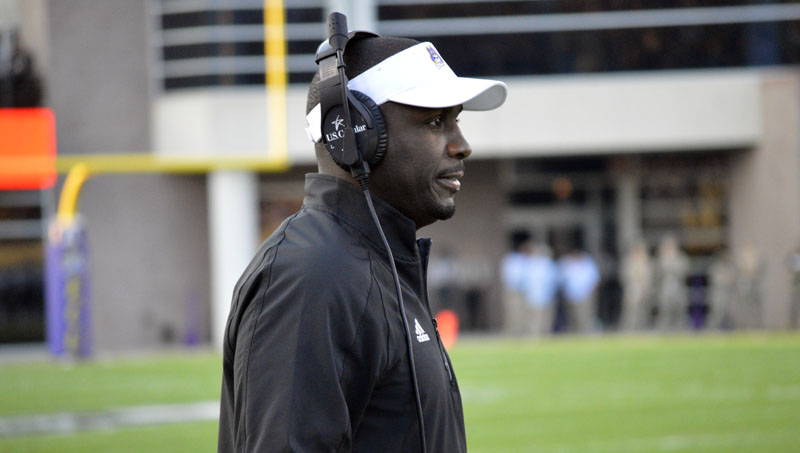 Scottie Montgomery paces the sideline during ECU’s meeting with Navy this season. With four of the American’s top programs set to debut new coaches next season, Montgomery and the Pirates could make some noise during his second year in Greenville.

The American Athletic Conference is a hotbed for young coaching talent. East Carolina football fans knew this back in 2014 when offensive coordinator Lincoln Riley, the mastermind behind the Shane Carden-led “Air Raid” attack, was plucked from Greenville to become the offensive coordinator at Oklahoma.

Fast-forward two years and the rest of the nation is taking notice, too. Former Memphis coach Justin Fuente was hired to replace the legendary Frank Beamer at Virginia Tech, and finished his first season with the Hokies as ACC Coach-of-the-Year.

This year, three of the AAC’s best squads had their coaches snagged by “Power Five” schools. Tom Herman, who led Houston to a 22-4 record during his tenure, was hired by Texas.

Willie Taggart rebuilt South Florida. After leading the Bulls to their best finish in school history this season, Taggart was tabbed to take over the head coaching duties at Oregon.

Matt Rhule led Temple to an AAC Championship this season. He recovered from a 2-10 record in his first year to take the Owls to back-to-back division titles. Rule will now move on to Baylor.

The fourth departure from the conference is Tommy Tuberville, who stepped down as Cincinnati head coach after a 4-8 season.

Some of the nation’s more prominent football programs are getting promising coaches in Herman, Taggart and Rhule. Unlike those “Power Five” schools, though, the AAC doesn’t have the same ability to attract coaches with the same proven upside.

That’s not to say there’s not going to be an influx of coaching talent. Former Texas coach Charlie Strong is set to become the next USF coach. Major Applewhite was promoted from offensive coordinator to head coach for the Cougars. Ohio State defensive coordinator Luke Fickell will be the next Cincinnati coach.

Temple’s opening is still up in the air, but each of those four teams should be prepared for a drop off. The ECU faithful experienced this rebuilding phase during this past season when Scottie Montgomery went 3-9 in his inaugural season as Pirates coach.

No matter how good a coach is, it’s tough to come into a program and win right away. That’s especially true of first-time head coaches, which is what a lot of new hires in the AAC will be. It takes time for a coach to recruit the players that fit his system, and to implement that system completely.

What this could mean for the rest of the conference is a sort of shift in power. Teams like the Pirates, Memphis and Central Florida have already begun the transitions that come with a coaching change. They’ll be ahead of the curve, as the teams that stood atop the standings this year have to go through similar growing pains that ECU, Memphis and UCF have been enduring.

Montgomery arrived in Greenville around this time last year with plenty of promise. Despite his largely unsuccessful 2016 season, he still showed glimpses of brilliance that Pirate fans should be excited about.

With the American’s elite teams set to come back down to Earth, the table is set for Montgomery and the Pirates to reassert themselves. If nothing else, it’s a chance to return to a bowl game next season after missing out in back-to-back years.

Montgomery, his team, and the athletic department all have their sights set on an elusive conference championship, though. Director of athletics Jeff Compher defined that as the benchmark for success when he relieved Ruffin McNeill of his coaching duties last year.

Next year could be that year.