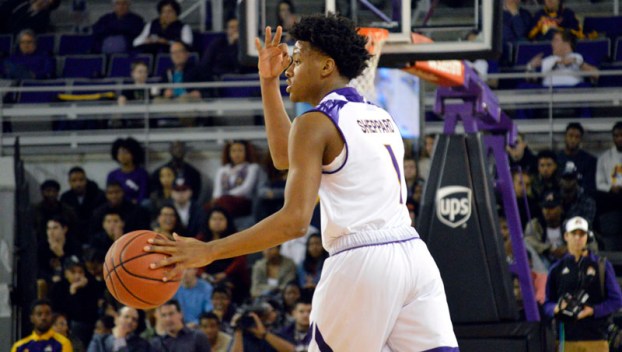 Freshman guard Jeremy Sheppard signals to a teammate. Sheppard has been a boost off the bench, and has performed well as ECU’s only true point guard.

GREENVILLE — It’s been nine days since East Carolina last hit the hardwood for a basketball game. The Pirates fell at Virginia on Dec. 6, but have been focused on overcoming final exams since then.

Coach Jeff Lebo said the team took a two-day break from practice for exams. When ECU did practice, it was abbreviated sessions. Success on the court is always important, but the end of the semester has the players set on finishing strong in the classroom, too.

“It’s tough because you’ve got to focus on finishing out the semester strong,” junior guard B.J. Tyson said prior to Wednesday’s practice. “We just have to continue figuring out what’s going on in the classroom and on the court. It’s pretty tough.”

Tyson, as well as his teammates, take their schoolwork seriously. However, Tyson tries to keep himself loose, much like he would while preparing for a game. Tyson posted a video to his Instagram page of him breaking out some dance moves as he went to turn in a final assignment for a class.

“I try not to think too much about my exams like that,” he said. “I try to keep my same process with the way I approach it. It’s pretty fun. My classmate actually caught me dancing going down to turn in one of my projects.”

Final exams are done now. The Pirates are glad to have those behind them. Much like they wanted to finish strong in their classes, they aim at closing out the non-conference stretch in a dominant fashion. 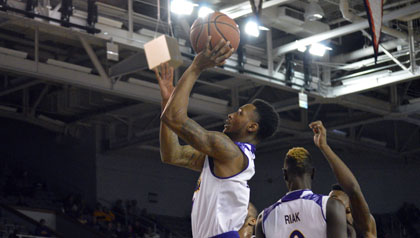 B.J. Tyson slashes through the defense and goes to the hoop earlier in the season. He and his teammates are excited to be done with exams and getting back to basketball.

Sometimes shifting focus from basketball to the classroom and back can be a challenge.

“I’m glad to be done. It’s a big relief,” said senior forward Michel Nzege. “I can just focus on basketball for a little while. … It feels like it’s been forever (since the last game), but it’s only been a few days. When you have such a long break between games, sometimes it’s overwhelming.”

Tyson added, “It’s been a long time. It feels like it’s going to be our first game of the season because it’s been so long. We’re approaching it the right way. I feel like practices have been competitive.”

Hard work and competition in practice is a key to not experiencing any rust or being lethargic when the Pirates host an impressive College of Charleston team. Like ECU, the Cougars have seven wins on the season. Their only losses came in succession to Central Florida, Wake Forest and defending NCAA Champion Villanova.

Joe Chealey and Jarrell Brantley lead Charleston with just north of 13 points per game each. Brantley, a 6-foot-7, 245-pound forward, is also grabbing 8.3 rebounds a game through 10 contests.

While players like Chealey and Brantley have jumped out because of their offensive statistics, Lebo is looking at how they defend.

“I know they’re very good. Watching them on film, they’ve got a tough schedule,” Lebo said. “They can really defend. They’re one of the top defensive teams in the country. They’ve got experienced, tough guards that can really defend in all areas. Brantley is a guy at the forward position that can post and he can shoot 3s.”

With the exception of an off game at Virginia, Andre Washington has been ECU’s go-to defensive presence in the paint. He’ll be tasked with locking down the smaller, but strong Brantley.

Even though the Cavaliers beat the Pirates by 23 points last time out, a handful of players had outstanding performances. Nzege, who Lebo has slowly been working back in since he recovered from a knee injury, had six points and no turnovers in 20 minutes against the Cavaliers.

Freshman guard Jeremy Sheppard had a breakout performance with 17 points and a pair of assists in 21 minutes off the bench. Sheppard, Nzege and others aim to carry that over to the Charleston game.

“It’s that time of the year. Everybody goes through it,” Lebo said. “They’ve had a lot on their plate. They’ve played a lot of games early. … We needed a break a little bit. Hopefully we’ll come out with some energy and some enthusiasm. We’ve played well at home, so that’s encouraging.”

Williams granted another year of eligibility

GREENVILLE — Jimmy Williams will get another year of eligibility at East Carolina, according to a release from ECU athletics... read more