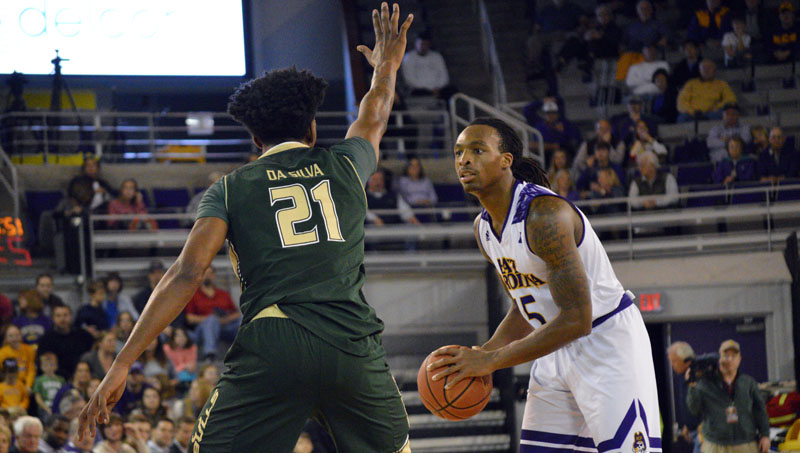 South Florida’s Tulio Da Silva gives Kentrell Barkley plenty of space during Wednesday’s game. Barkley is in the midst of a bad shooting spell, but ECU needs him to bounce back against SMU on Saturday.

Toppling the Mustangs to improve to 2-0 in the American Athletic Conference will be a daunting task. SMU (11-3, 1-0 AAC) has won seven in a row, which included its league opener against Memphis last time out. Its last loss was at Boise State on Nov. 30, and the other two defeats came at the hands of a strong Michigan team and undefeated USC.

Of the four Mustangs averaging at least 11 points per game, two are forwards. Pirate center Andre Washington and the forward corps will have their work cut out defending leading scorer Semi Ojeleye (6-foot-7) and Ben Moore (6-foot-8).

Washington and Kentrell Barkley did an impressive job defending the paint against South Florida on Wednesday. The Bulls, shot a dismal 3-of-15 from 3-point range, got 26 points in their frequent trips to the paint. Washington and Barkley both hauled in eight rebounds in the game, and the former had six blocks.

“I thought (Washington) was good blocking shots and he was active on the offensive glass,” Lebo said after the win over USF.

ECU’s defense has played a significant role in many of its wins at this point in the season. The Pirates followed a lights-out performance in the first half with a cool 16.7 shooting percentage in the latter 20 minutes. 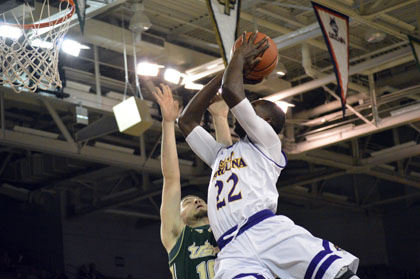 Raquan Wilkins drives into the paint against USF on Wednesday. Head coach Jeff Lebo is hoping ECU can heat up a bit from behind the arc so as to open things up inside.

Wednesday marked just the second game with freshman Jeremy Sheppard starting at point guard. He made just 2-of-9 shots from the field and turned the ball over four times. Barkley struggled, too. He missed all seven of his shots.

“We’ve got to get a little bit better seeing the next play,” Lebo said. “My big thing with them has been not putting the ball over their head and seeing what’s open before you catch the basketball; to not let the ball stick in your hands.

“We’re getting better at that. We’ve got to continue to get better. That’s being able to share the ball and to not put the blinders on. … We’re better at it when we have our smaller lineup. We’ve got such a battle for us offensively because we’re not shooting the ball particularly well. We’ve got to get some more guys that can shoot the ball consistently.”

ECU doesn’t have much time to figure that out. The Mustangs hold opponents to 38.6 percent from the field and 32 percent from long range. The Pirates were able to earn a win Wednesday thanks to freshman Elijah Hughes’ coming out party, but they’ll need all that and more to earn another AAC win.

They’ll look to start from the outside and work their way in.

“We’ve got to be more consistent shooting the basketball from 3 to make people close out,” Lebo said. “It’ll help our more athletic get the ball into the painted area.”

Caleb White and B.J. Tyson lead the team in scoring, but they need Barkley to snap the slump he’s been in as it’ll be all hands on deck for ECU’s offense. He can shoot from long range, but the paint is where he thrives and where he’ll find that confidence again.

“They’re not guarding him. You can’t get in there when they’re not guarding you,” Lebo said. “He’s struggling shooting the ball. Hopefully he can get out of it. He’s worked at it. He’s got to see a couple go down in the hole to get his confidence right.”

Tip off in Minges Coliseum is slated for noon on Saturday.