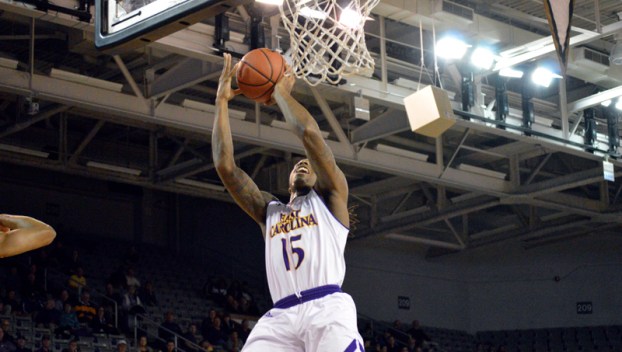 Kentrell Barkley drives to the basket for a layup. Barkley’s free throws down the stretch were key to ECU hanging on for its first win of 2017.

GREENVILLE — What started off as a relevantly uneventful game between East Carolina and Tulsa Wednesday turned into a nail-biting victory. Kentrell Barkley’s clutch free throws preserved a 69-66 lead and helped the Pirates snap a six-game losing streak.

“Getting our first win of 2017 is really special,” Perry said. “And as a coach there’s no greater feeling than hearing that sound in the locker room of your kids and the excitement that they have. They’ve gone through a lot of adversity.”

The game, which was a defensive battle for most of the night, turned into a back-and-forth affair with the teams trading blows down the stretch. ECU (10-11, 2-6 American Athletic Conference), which held a 10-point lead with 5:19 left in the game, watched its advantage whither away by an onslaught of Tulsa (11-8, 5-2 AAC) scoring.

A timely 3 by Tulsa’s leading scorer, Junior Etou, brought the Golden Hurricane within four before Barkley stepped to the line to salt the game away. Etou finished with a game-high 31 points, but it was Barkley’s two free throws that preserved the victory.

“We’ve been preaching confidence,” Perry said. “As a coach, all you want to do is tell guys shots are going to eventually fall. And let them see that you have faith in them. I want to see guys shoot the basketball. Play smart, play fast and play without over thinking it.”

The Pirates led for 27:07, including the entire second half. The game itself was in stark contrast to the way ECU played offensively during its losing streak. The Pirates hit six 3s and converted 21 free throws. This, Perry says, is a byproduct of increased confidence and toughness.

“We’re getting used to the coaching and doing what (Perry) expects,” Barkley said. “And we’re just playing without worrying. Just go out there and have confidence because sometimes we lack that.”

Defensively, the Pirates played well, as they have all season. But it was rebounding that gave ECU the edge in the close game. Led by a trio of double-digit rebounders, the Pirates outdid Tulsa on the glass, 49-39. Barkley, Deng Riak and Andre Washington led the way with 11, 11 and 12 boards, respectively.

“We’ve been putting a lot of emphasis on rebounding,” Perry said. “Defense wins game. The final phase of defense is rebounding so we’ve really been emphasizing that. There are times in practice where we do drills and there are no points for scoring, just for getting rebounds.”

Barkley, who led the way with 19 points, 10 of which came at the free throw line, said the Pirates keyed in on forcing Tulsa point guard Sterling Taplin to shoot the ball. The game plan resulted in Taplin shooting just 2-for-9 and the Golden Hurricane shooting 31 percent collectively.

“The focus is always the same,” Barkley said. “Tonight we just wanted to execute on defense and stop them from doing what they’re good at. The point guard, we know he can’t shoot the jump shot so we wanted to make him shoot those shots.”

Freshman guard Elijah Hughes, along with Barkley, finished in double-digits for the Pirates. He had a dozen points and dished out three assists. He finished off an and-1 play late in the game that proved to be a difference maker down the stretch.

GREENVILLE — There have been silver linings for East Carolina over the last few weeks. Whether it’s been holding Central... read more