Early enrollees getting right to work 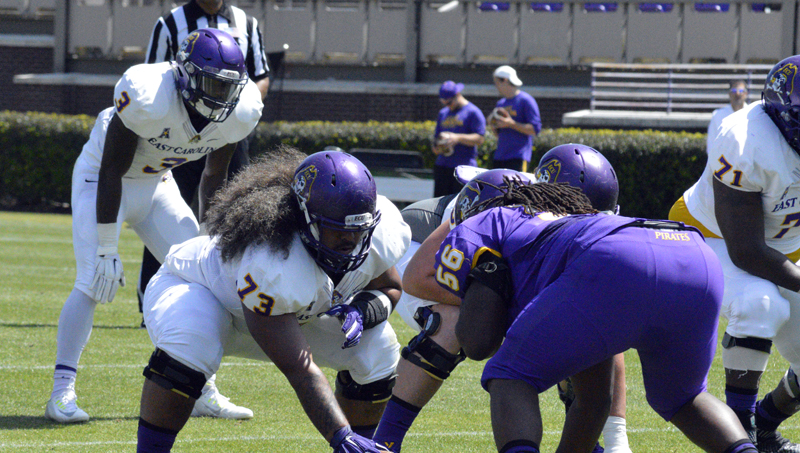 Christian Matau gets ready to snap the ball during ECU’s spring game last year. With signing day behind them, the Pirates and their 10 early enrollees will now set their sights on the spring.

GREENVILLE — With National Signing Day in the rearview mirror for head coach Scottie Montgomery and the East Carolina football team, the time has come to start preparations for the 2017 season.

The work can start early for 10 of ECU’s 22 signees as they have already enrolled in classes for the Spring 2017 semester and are currently on campus.

Perhaps most notable of the group is quarterback Kingsley Ifedi, who was named the North Carolina Player-of-the-Year in 2016. He led Vance to a deep playoff run. As a true freshman, he will have a chance to compete with the likes of Gardner Minshew and Reid Herring for a spot on the depth chart behind center.

Montgomery and his staff locked down the most players from North Carolina at the Football Bowl Subdivision level, beating out the likes of North Carolina, N.C. State and Duke.

The second-year head coach made a point to look at size in this class, bringing in lineman over 6-foot-4 and finding longer players, especially in the trenches. He made it a point to say there was only one player in the class under six feet. It came in the form of wide receiver Jayden Borders, who is already enrolled. Borders won four state titles in his four years at Shelby. Montgomery said he has never coached a player with his type of winning pedigree.

Borders will be pushed early and often in his ECU career by a fellow early enrollee receiver in the form of Leroy Henley. His reported offer sheet included the likes of Auburn, Michigan, Michigan State and Florida. Montgomery raved about the 6-foot-1 pass catcher.

“He’s versatile, he’s a threat outside, he can catch the ball quick, he can convert on the chains,” Montgomery said. “Really like what we’ve seen from him so far.”

Last season, ECU struggled to reach the quarterback on pass rushes. Montgomery addressed the issue in this class and has a few new pieces already on campus.

Taijh Alston will likely play defensive end for ECU and may have a shot to see early playing time off the edge. His size is one of his best assets, standing at 6-foot-4 and weighing in at 215 pounds.

“He’s going to provide immediate help for us in the pass rush,” Montgomery said Monday. “We brought eight kids on the front and we think that five have immediate pass rush help. He is one of them.”

With 10 players already enrolled from the 2017 class, having players already in line to come to campus helped take the pressure off Montgomery late in recruiting. Not only did it help calm things down on signing day, but he said it helps his group get an early jump on the future.

“The stress is removed in the second part of the recruiting process, the contact period,” he said. “I’m able to stay in a room with a coach or a player on a home visit for two, three hours. I can stay there for a long time because I don’t need to make three home visits per day. When other teams are coming in and seeing 22, 23 people (in a short time period), they’re not building the relationships that we’re building.”

With spring workouts picking up and spring practice days closing in, the members of the 2017 class will hope to have a leg up on the college experience headed into their true first year at the Division I level.