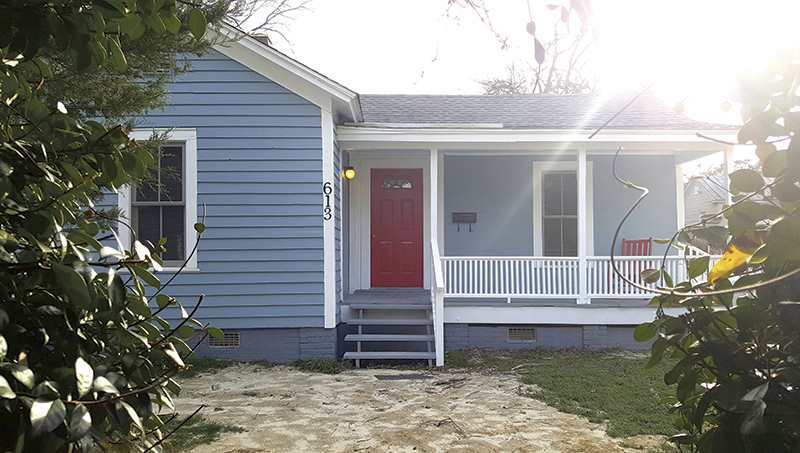 Call it providence, luck or fate, sometimes events line up to bring about the best possible result. Real estate is no exception and that’s how Washington transplant Patty Franz found herself the owner of two homes, their yards joined by a gate, in the heart of the historic district.

It was a change of scenery, and of lifestyle, that prompted Franz to search online for new place to put down roots. There, she found Washington.

“I knew I was going to leave Boston when my youngest graduated from high school,” Franz said. “Boston is hard — between the traffic and the cost of living and the weather, I didn’t want to stay there.” 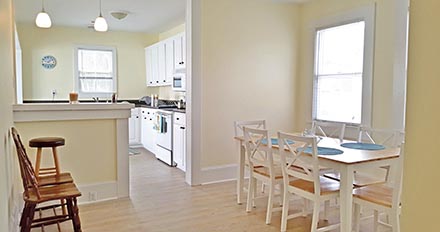 LIGHT HOUSE: The wall between kitchen and dining room was removed and replaced with a half wall and bar. Now light from the deck’s sliding glass doors illuminates the cozy, extended kitchen.

Instead, the place she wanted to call home had better weather, better tax rates and was, preferably, located near the water. She found all three requirements in Washington — in fact, it was such a perfect fit, she decided to buy not just the one house, but two. She found her perfect home on Charlotte Street, but it was a serendipitous walk around the corner onto Old Second Street that planted the idea of guest housing, for her own family and, in the future, for others.

“I actually had no intention of buying the cottage,” Franz laughed.

But that changed when she realized that with her own three daughters visiting often, as well as her sister and her sister’s two boys, the cottage seemed like a great option for additional housing, especially since the cost of the two houses combined still came in under her budget.

“It’s just for personal use. I think what I’ll do is VRBO (Vacation Rental By Owner) whenever my family is not there,” Franz said. “People can rent it at Christmas or Thanksgiving. I think people in the neighborhood have relatives come in, and it’s a good size house to put overflow in.” 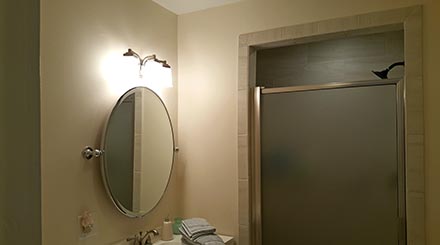 IN THE DETAILS: Both modern, minimal, with a touch of beach, the renovated full bath keeps the theme of the rest of the guest cottage.

The cottage needed a little work, however, and for the last several months, Franz, with the help of contractor Johnny Bell, has turned a small, aging house into a comfortably cozy gem on Old Second Street.

It’s got its quirks — Franz christened the house the Tilted Cottage because the foundation had settled to the point that angles between floor and walls, walls and doors, walls and ceilings, were all just a bit off.

“I’m telling you up front, it’s a little skewed,” she laughed. 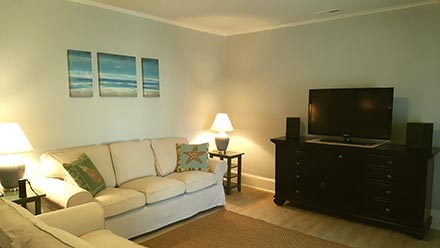 No matter. The changes made during renovation have transformed it into an Inner-Banks-coastal cottage. Vinyl flooring and carpet throughout have been replaced with manufactured plank the color of driftwood. Soft, beachy colors now grace the walls. The home’s original single full bathroom has been renovated with a more modern look, and a second full bath was added in a space that had been used as an oversized laundry room. By far the most impactful change during renovation was to the kitchen and dining room. Where a wall and narrow doorway once separated the two rooms, there is now a half wall with a bar and seating. 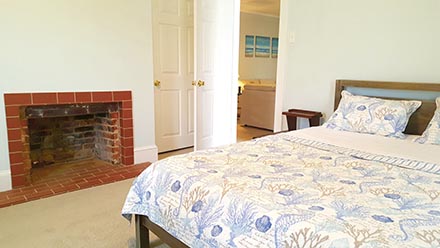 BEHIND THOSE WALLS: During renovation, a fireplace was discovered behind one wall of the master bedroom. With brick facing replaced and wired for gas, the owner is planning to install gas logs.

“I picture everyone there in the morning, on their laptops with their coffee, catching up on the news,” Franz said. “I think the kitchen and dining room is where everyone’s going to live anyway because it goes straight out to the back porch.”

The light that pours into the kitchen through sliding glass doors onto the deck now brightens the small dining area.

“It’s amazing how much light was brought in,” Franz said. “I think that was one of the best decisions we made.”

The process of renovation has been an organic one, in which ideas flowed and plans were modified on the fly, she said. And along the way, there were a few surprises.

They found the cottage originally was much smaller — it’s been added onto several time over the years — and the walls of the first addition onto the back of the house simply abutted the original structure and are not actually joined. Workers found evidence that the closet in the master bedroom, also part of the original structure, was once a water closet. But the real find came in the discovery of a fireplace behind a wall in the master bedroom, its brickwork intact. Franz has since it wired for gas and plans to insert gas logs into the newly revealed fireplace. 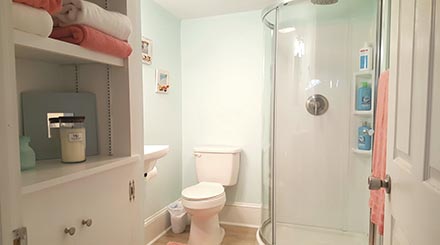 USE OF SPACE: During renovation, a second full bath was added in an area previously used as the laundry room.

The cottage’s first test run will be when her family comes to town for the Easter holiday, she said. The renovation work complete, the home is ready for guests and Franz is in the process of getting the Tilted Cottage listed on VRBO.

“This is something I never planned on doing, and I’ve never done it before, so it’s a lot for me, but sometimes you have to roll with it. It will be a learning experience for me,” she said.

“There’s a lot of personality in that house. … It’s going to be a happy house.”