Pirates not getting lost in the hype 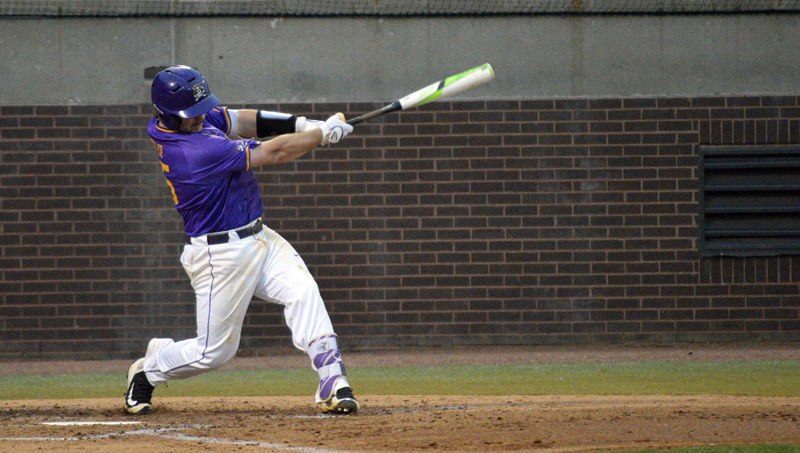 Senior Eric Tyler swings at a pitch during a game last season. Tyler and the Pirates are focusing on themselves and what they can control this weekend at Ole Miss.

GREENVILLE — East Carolina has traditionally faced some tough competition early in the baseball season. Last year, the Pirates earned some quick notoriety when they won a weekend series over Virginia in the second week of their last campaign.

This year is a little different, though. ECU travels to Mississippi on Friday to open a season chock full of high hopes and lofty aspirations. Both clubs have been ranked in the preseason, and the Pirates have been tabbed as high as No. 6 in the nation.

College baseball fans across America will have their eyes on this series. These Pirates have never started the season with so much widespread attention on them. It’s not a factor, though. Ignoring outside noise has been a principle of coach Cliff Godwin’s regime.

“I think we do a pretty good job of ignoring the noise,” senior second baseman Charlie Yorgen said. “That’s something we preach is ignoring the noise, so it’s just putting the noise behind us and competing like we always do. I don’t think there’s any added pressure for anything. We always talk about no pressure, no diamonds. I guess it’s a good thing, good recognition, but it doesn’t mean much to us.”

A significant amount of ECU’s success since Godwin, now in his third year, took over can be attributed to the players buying into philosophies like that. Even the freshmen have adopted the mindset. With senior first baseman Bryce Harman injured to start the season, freshman Spencer Brickhouse will start in his place.

Brickhouse won regular-season conference titles and numerous other accolades as he helped Bunn go 77-18 during his four years. He said he can’t compare the atmosphere he’ll see at Ole Miss to anything he saw in high school, but plans on simply brushing it off and playing his game.

“Comparing it to high school is pretty tough. This is some next-level stuff,” Brickhouse said. “I can’t really compare it. Coach Godwin laid it out for us freshman and (junior college) guys that he wants it done this way. … We knew coming in it was going to be a lot different than high school. … It’s hard to compare it to something in high school and make the event smaller than what it is.”

This weekend is going to be hostile for the Pirates. It’ll be a sort of trial by fire for this team that is dead set on a national championship. Godwin and company are confident in their ability to dial in and focus on themselves.