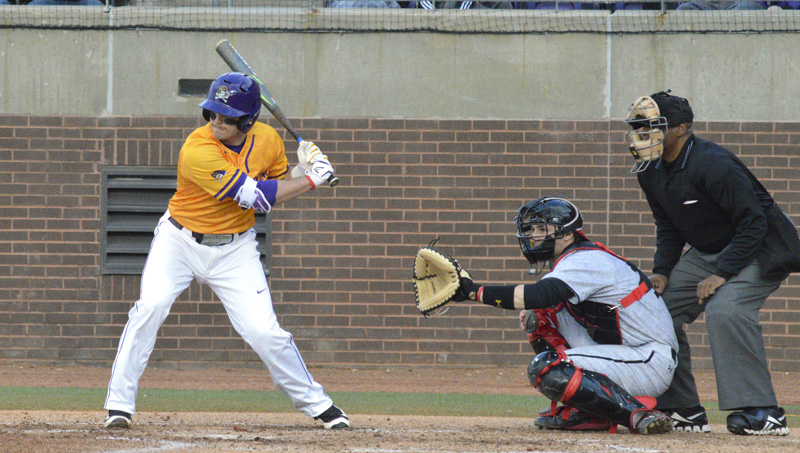 ECU senior Kirk Morgan awaits a pitch during a game against Maryland last season. Morgan and the Pirates had a field day at the plate all weekend against La Salle.

GREENVILLE — With a series win against La Salle already clinched by the start of Sunday’s East Carolina baseball game and an eight-run lead headed into the top of the second, ECU freshman pitcher Trey Benton cruised on the hill and led ECU to a sweep in its first home series of 2017.

Benton struck out 10 batters and walked just three while allowing two hits over five innings of work as he picked up his first career win as ECU sailed past the Explorers, 12-1. His 10-strikeout performance was the most by an ECU freshman since Davis Kirkpatrick in 2014.

He had at least six of his 10 strikeouts come off of his breaking ball, which was not where it needed to be against Ole Miss last weekend.

Benton was aided by a monster eight-run first inning by ECU while La Salle (0-7) starter Mike Anthony struggled to throw strikes or execute in the field. After getting a quick first out on second baseman Charlie Yorgen, the frame was blown open on the back of three walks and two hit batsmen and a pair of hits from Eric Tyler, the only two of the inning. One of Tyler’s base knocks delivered two runs to give the Pirates their seventh and eighth runs of the inning. ECU was also bailed out by an Anthony error as he went to cover first base on a ground ball.

“I’ve never quite seen (12 runs on six hits), but it was fun to be a part of,” Tyler said. “Guys did a good job of being patient at the plate and taking the pitches we could hit and driving the ball.”

Spencer Brickhouse and Kirk Morgan were the only two Pirates to play the game from start to finish as ECU head coach gave a shot to many of his current bench players.

The sweep was the first of the season for the Pirates, who were coming off the heels of a sweep last weekend against Ole Miss. ECU also swept the week as a whole after Wednesday’s win at Campbell.

Saturday, ECU benefited from three team home runs, including a big grand slam from senior outfielder Luke Bolka. Bolka’s slam came in the third inning and put ECU up 5-0. Watkins had a solo shot in the first inning and just one inning after Bolka, Tyler sent a blast out to left field to give the Pirates a 6-0 advantage.

Senior southpaw Jacob Wolfe struggled with his control at times as he walked three batters and struck out just two over 5.1 innings of work. Wolfe was pulled after a rocky start to the sixth frame. He walked a pair of Explorer batters and threw a wild pitch before Yan Carlos Rivera blasted a three-run home run to right field to cut ECU’s lead in half.

Sophomore Sam Lanier was called upon to stop the bleeding and got ECU out of the frame. He pitched 1.2 innings, struck out three of the six batters he faced and allowed just one hit in the outing. Jake Agnos made another appearance and came on in the eighth inning and finished the game on the hill, with ECU winning 8-4. The highly touted freshman had a strong outing and allowed one run on two hits with a pair of strikeouts.

Friday kicked off the sweep for the newly-No. 9 ranked Pirates. Brickhouse had a day at the plate as he went 2-for-4 with three runs.

ECU and La Salle entered the bottom of the eighth tied at three before the Pirates blew the game open in the frame. Jorge Jimenez came into the game on the mound for La Salle and promptly walked Yorgen and Drew Henrickson. T.J. Riles gave ECU the lead with a single past second base as Yorgen scored from second. Bolka delivered Henrickson on a sac fly, Riles scored on a balk and Brickhouse scored on a Kirk Morgan pinch-hit RBI double to wrap up the scoring in the inning.

Ingle came in for Matt Bridges in the ninth and got two Explorers to strike out before getting a ground out to end the game with ECU on top, 7-3.

ECU will get back on the diamond Wednesday for a matchup with Elon at home with a 4 p.m. first pitch.