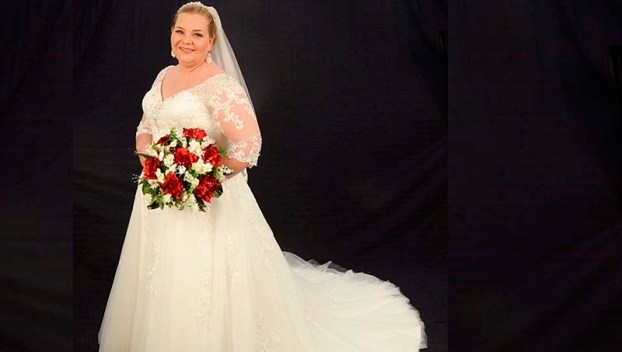 Given in marriage by her brother-in-law, Charles Jeffrey Mault, the bride wore a princess cut A-line wedding gown.  The gown was beautifully detailed with an intricately beaded crystal and sequin sweetheart neckline which carried onto the delicate lace illusion 3/4 sleeves.  Her gown had a soft tulle skirt with lace appliques, and the back of the dress had a deep open back with satin covered buttons and a chapel length train, covered in lace appliques. Her veil was a double layer long lace blusher that was lifted by the groom while being served communion during their wedding ceremony.

Mrs. Pamela Rogers Mault, of Washington, NC, sister of the bride, served as matron of honor. Maid of honor was Ms. Lindsey Dishman of Charleston, SC.

Bridesmaids were Mrs. Carol Bechtold of Wilmington, NC, Mrs. Lisa Klemmer of Richmond, VA, Mrs. Maureen Lawson of Rockville, MD, and Ms. Kristin Pereira of Greenville, NC. The bridesmaids’ dresses were floor length, deep red satin A-line ball gowns.  They had a structured bodice with a deep V in the back, complementing the bride’s gown.

The church was decorated with poinsettias and large floral bouquets.  The bridal bouquet consisted of magnolia leaves, winter greenery, red and white roses, and lily of the valley, the flowers of her Christian Sorority, Sigma Alpha Omega.  The bouquet was accented with a single blue forget me not, the flower of Alpha Phi sorority. Her father’s handkerchief was wrapped around the bouquet, as well as memory charms that included photos of her father, Jay Milton Rogers, and her Uncle, Joseph E. Rogers.

Following the ceremony, a reception was held at  Washington Civic Center. Music was provided by The Embers, featuring Craig Woolard.

The rehearsal dinner was hosted by the groom’s father in the fellowship hall of Old Ford Church of Christ in Washington, NC

The bride is a graduate of North Carolina State University, and is currently employed in Beaufort County Schools.

The groom is an Air Force Veteran, and is currently employed for the state of North Carolina.

After a honeymoon to Miami, Florida, the couple will reside in Washington, NC.

Katherine O’Brien Faucette and James Chandler Stroud were married Saturday, December 31, 2016 at seven in the evening at the... read more