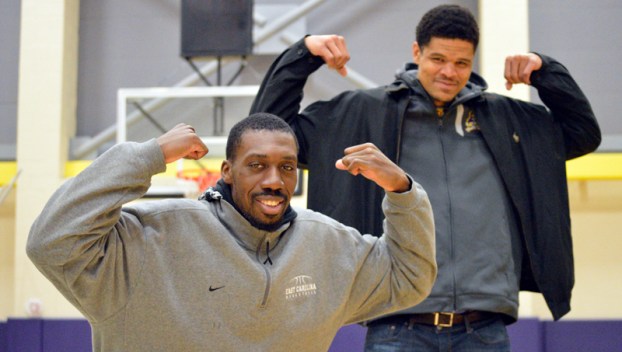 ECU basketball stars Michel Nzege and Andre Washington are both big-time wrestling fans. The two Pirate big men are teaming up to make the trek to Sunday’s WrestleMania event.

ORLANDO — It’s labeled “the ultimate thrill ride,” and East Carolina basketball players Michel Nzege and Andre Washington are going along for the ride.

The Pirate duo touched down in Orlando on Thursday for WrestleMania. The event is World Wrestling Entertainment’s equivalent of the Super Bowl. Tens of thousands of professional wrestling fans from around the world are converging on central Florida for what Nzege describes as a celebration of wrestling.

“It’s a whole weekend. It’s not just the WWE experience, it’s a wrestling experience,” Nzege said. “It’s a celebration of wrestling. I told (Washington) it’s going to be crazy. People come from all over the world.”

Nzege attended last year’s WrestleMania in Dallas. A lifelong wrestling fan, he was sucked in immediately. He felt like he was surrounded by 100,000 of his closest friends as he attended the all-access events to get a moment to meet his favorite competitors. 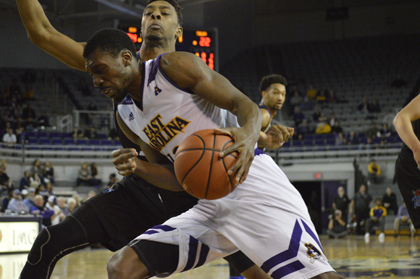 Michel Nzege dips his shoulder and drives to the basket during a game earlier in the season.

He’s taking what he learned from his first WrestleMania experience last year and applying it to this year’s itinerary. Nzege and Washington are getting there earlier and leaving later. In addition to all the WWE stops — the Hall of Fame, NXT TakeOver, the all-access events, and of course WrestleMania — they’ll be taking in as much wrestling from the independent scene, too.

Washington, however, is making the wrestling fan’s ultimate trek for the first time. ECU play-by-play voice Jeff Charles referred to the 7-foot Pirate center as “Andre the Giant” throughout the season. He’s looking forward to seeing some of the wrestlers he watched growing up compete before his very eyes. 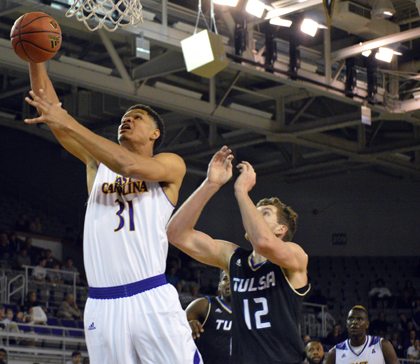 Andre Washington uses his 7-foot frame to tower over an opponent as he goes in for a layup.

Nzege is a die-hard fan. Washington followed plenty when he was younger, and is now getting back into it as he’s headed to the biggest show of the year. He’s most excited for Sunday so he can see some of the grapplers that were prominent when he first got into it.

“Andre the Giant” will have that chance. Household names like Triple H, Brock Lesnar, Goldberg and the Undertaker are all veterans booked for WrestleMania.

Nzege added, “I’m excited for that, too. A.J. Styles and Shane McMahon should be crazy. … Roman Reigns and the Undertaker, it might be bittersweet. The way they’re building it up, I think it might be his retirement. I’m not looking forward to seeing Goldberg.”

Washington said he liked Goldberg when he was younger, but has also soured on him since his return back in November.

There’s so much going on this weekend. WrestleMania surpasses the wrestling realm. It’s an event that takes center stage in the world of entertainment. The aesthetic setup in Camping World Stadium will be something to behold. There will be musical performances.

It’s something in which anyone can find enjoyment. But, for the wrestling fan, it’s akin to Christmas. The entire experience is a memory that stays with a fan throughout his life.

GREENVILLE — The East Carolina baseball team will kick off its conference slate of games this weekend against Connecticut after... read more