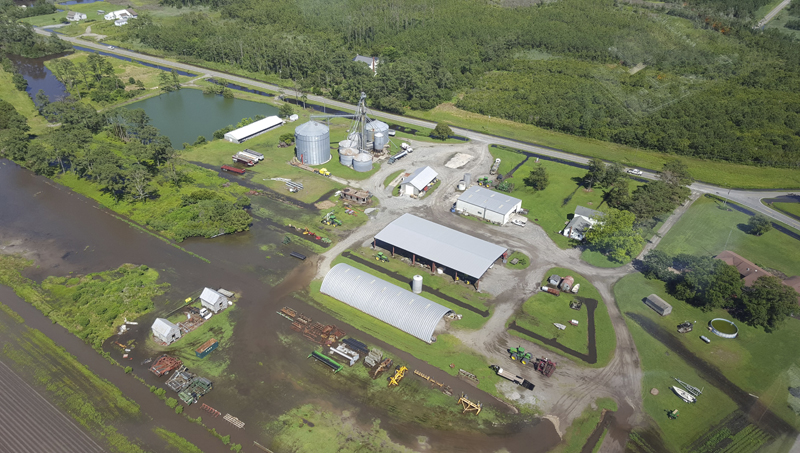 WATERLOGGED: The flatlands of Beaufort and Hyde counties are no stranger to flooding. Farmers continue to try to recover from unusually wet conditions over the last couple of years.

Last week’s heavy rainfall proved to be a headache for local corn growers.

In some areas of eastern North Carolina, as much as 9 inches of rain fell from April 23-25, and flooding from heavy rainfall is still affecting areas near the Tar and Neuse rivers and Contentnea Creek, as the waterways exceed the flood stage. Many areas have reported the worst flooding seen since Hurricane Matthew in October 2016.

Low-lying areas in Beaufort County also experienced flooding, but the Pamlico River did not exceed its flood stage at 4 feet, peaking at just above 2 feet, according to data from the National Weather Service in Newport.

“Corn cannot tolerate being underwater for a long time. Corn can be completely underwater for up to 72 hours before death of the plant occurs,” a North Carolina State University report states. “Plants that have been covered by water for 24 to 48 hours can become infected with a disease known as Crazy Top. … This disease can cause the plant to grow in unusual ways, often causing the tassel to have uncontrolled growth.”

Although crops going underwater were a concern with this bout of rainfall, the more widespread concern was saturated soil. Saturated soil can cause corn plants to lose nutrients, such as nitrogen, sulfur, magnesium and boron, when the water in the soil drains and takes the nutrients with it, according to the NCSU report.

Although soils vary when it comes to loss of nutrients, the report estimates that most farmers will see a 30- to 50-percent drop in all nutrients, but especially nitrogen.

“The key talking point is that corn growers across the state will need to plan on a sidedress application of (nitrogen) and possibly other nutrients like (sulfur) to avoid reductions in yield,” Dr. Ronnie Heiniger, Extension corn specialist, wrote in an email. “This will have the largest impact on growers who have already applied most of their fertilizer. They will need to supplement what they have already applied.”

Area farmers are still trying to recover from unusually wet weather over the past couple of years. Last year, the flooding in Hurricane Matthew’s wake led to a 50-to-70-percent loss on cotton yields and hurt soybean growth. Corn, soybeans, cotton and snap beans were underwater as well after tropical storms Bonnie and Colin in mid-2016.