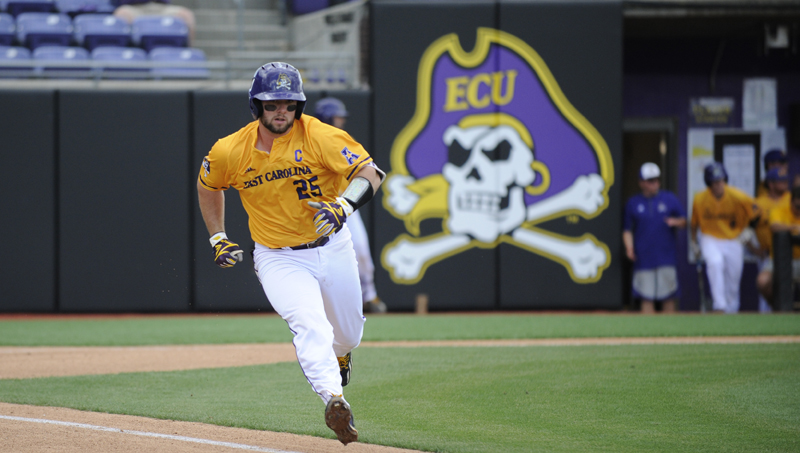 Eric Tyler darts to first base in a game against Tulane last weekend. Tyler had a field day on the Green Wave’s pitching. He wants to keep that ball rolling as ECU aims for a third-straight series win.

TAMPA, Fla. — After a long layoff to tackle final exams and other end-of-semester projects, East Carolina embarks on a trip down to South Florida to begin the final stretch of the season.

The Pirates (24-21, 4-11 American Athletic Conference) will aim to continue building momentum and possibly climbing the league ranks ahead of the conference tournament, which begins on May 23. Winning the AAC crown will be ECU’s only ticket into the postseason after the way things have unfolded over the last five or so weeks.

The Pirates had no midweek tune ups ahead of their trip to Tampa, Florida, but they are coming off a weekend series against Tulane in which their bats carried them to a 15-8 win in the opener. Senior Eric Tyler, who was named conference hitter-of-the-week, will hope to continue his dominance at the plate as he forgoes walking across the stage with his classmates during this weekend’s graduation festivities.

Tyler collected seven hits during last weekend’s three-game set with the Green Wave. He accounted for four of ECU’s 15 runs in the series-opening shootout. In Sunday’s rubber match, he batted in two and scored one himself in a 5-3 win that sealed the team’s second-consecutive series win.

The Bulls can put the bat on the ball, too. Kevin Merrell leads the way with a .403 batting average over his 35 games played. Behind him, Duke Stunkel, Luke Borders and Coco Montes all bat over .300.

USF boasts plenty of power throughout much of its lineup. The Bulls have 34 collective home runs and have totaled 130 extra-base hits going into the weekend. Joe Genord and Cameron Montgomery share the team lead with seven homers apiece. Merrell, Borders, David Villar and Chris Chatfield have all knocked at least five out, too.

Those bats helped pick up a series win over a Houston team that came into Greenville and smoked the Pirates in the middle of that 0-10 start in conference play.

USF has the pitching to compliment the offense, too. Phoenix Sanders got the Friday-night nod last weekend. He has a 5-2 record and 2.94 earned-run average over his 11 starts. Houston tagged him for seven runs (six earned) on 10 hits and a walk last weekend. Sanders has thrown the fewest innings of USF’s typical weekend starters, so ECU may hope to jump on him early and force the Bulls to dip into their bullpen.

Peter Strzelecki took the ball on Saturday, but only lasted 1 2/3 innings before getting chased by Houston. Ryan Valdes threw just north of four frames of shutout baseball in relief to improve to 9-0 on the season. His performance may have made the middle of the weekend rotation a little tricky.

Shane McClanahan started last Sunday. He conceded all four Houston runs on six hits and two walks over 6 1/3 innings. Andrew Perez picked up the win and Joe Cavallaro got the save as each threw 1 1/3 innings in relief. The two of them have combined for seven wins and nine saves this season. USF’s bullpen gets a bit shaky after them and Mark Savarese, who has a 2.21 ERA in 16 appearances.

Pirate ace Evan Kruczynski moved back into his Friday role last week. He struggled a bit as he was tagged for seven runs (all earned) on eight hits and three walks. He lasted just under six innings. ECU will hope to get more mileage out of him this weekend.

While Kruczynski will look to bounce back a bit, Jake Agnos will look to keep the ball rolling after a dominant Sunday showing. He rolled through 7 1/3 innings, giving up just one run on four hits. He had 10 strikeouts, three of which got him out of an early jam.