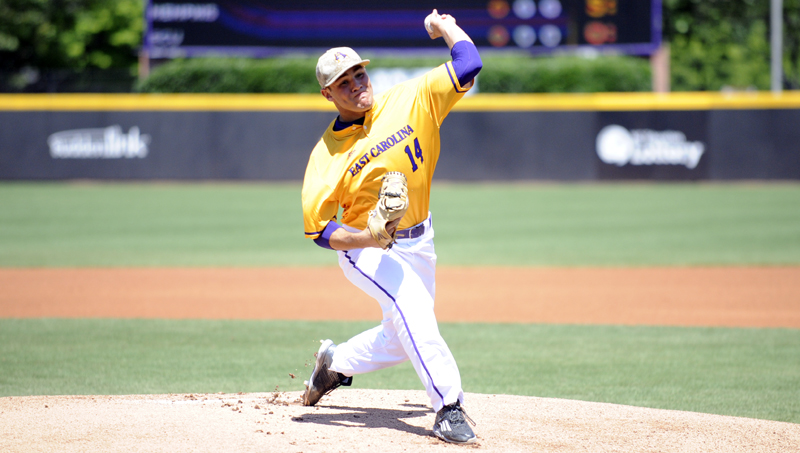 Jake Agnos throws a pitch against Memphis last weekend. Agnos started what ended up being a 3-2 win in 11 innings. ECU and UConn played a pair of one-run games that both went the Huskies’ way as they swept the Pirates earlier this season.

STORRS, Conn. — This weekend will tell a lot about the state of East Carolina baseball heading into the American Athletic Conference tournament, which starts Tuesday in Clearwater, Florida. The Pirates (28-25, 6-15 AAC) travel north to Connecticut. They wrap up their season with a series against the Huskies (29-22, 12-9 AAC).

A season that began with preseason top-10 rankings came unraveled when ECU opened conference play against UConn in Greenville. The Pirates showed signs of weakness when they were swept by Mercer two weeks prior, but bounced back by winning five of their last six games heading into AAC action.

The Huskies ended up taking all three games in Clark-LeClair Stadium. Two of ECU’s losses that weekend were one-run games.

Tim Cate is likely to toe the rubber for Thursday’s opener. Last time out, Cate scattered five hits and two walks over seven innings. He conceded an unearned run as he used 13 strikeouts to keep the Pirate offense at bay. John Russell earned the save as he fanned five over the final 1 2/3 innings.

Chris Holba, who returned to action for Tuesday’s home-finale win over Campbell, took the loss in that game. Even so, he dazzled in allowing just two runs on eight hits over 7 1/3 innings. The Pirates will again be without ace Evan Kruczynski, who was injured last time the two met. Kruczynski will be resting ahead of the conference tournament.

The Huskies endured a 10-inning game in Greenville to win the first series between them and the Pirates. ECU, again, got another quality start. This time it was Trey Benton only giving up two runs (one earned) as he dispersed five hits and two walks over seven innings.

The Pirates ran out of gas in the finale of that conference-opening series. Five errors let four unearned runs come in during Jake Agnos’ four innings on the mound. Four bullpen pitchers handled the remaining four innings, combining to give up just one run. Matt Bridges, Davis Kirkpatrick and Ross Ryan combined to throw four perfect innings.

ECU will need to get long starts from the three pitchers it rolls out. Trey Benton and Jake Agnos are likely to take two of the three starting jobs. Saving bullpen arms ahead of Tuesday may be the way to go, although staying in rhythm could be important to a Pirate bullpen that has been trending upward as of late.

A noticeable improvement from nearly two months ago will go a long way in bolstering ECU’s confidence going into next week, which is its only way to earn a postseason bid. UConn’s lineup isn’t particularly fearsome. Willy Yahn leads the way with a .317 batting average. Isaac Feldstein leads the team in RBI (39), home runs (six) and extra-base hits (23), but there’s not much power beyond him.

The Pirates will need to use their pitching to keep the score close against a stingy Husky defense. Last weekend’s 11-inning, 3-2 series-clinching win against Memphis marked just the second time this season ECU won a one-run game.

Seeing first hand a sort of turnaround since the wheels began to come off almost two months ago will go far for an ECU team that hopes to still be playing after next week.