Stepping Up: Still hope for a Pirate postseason 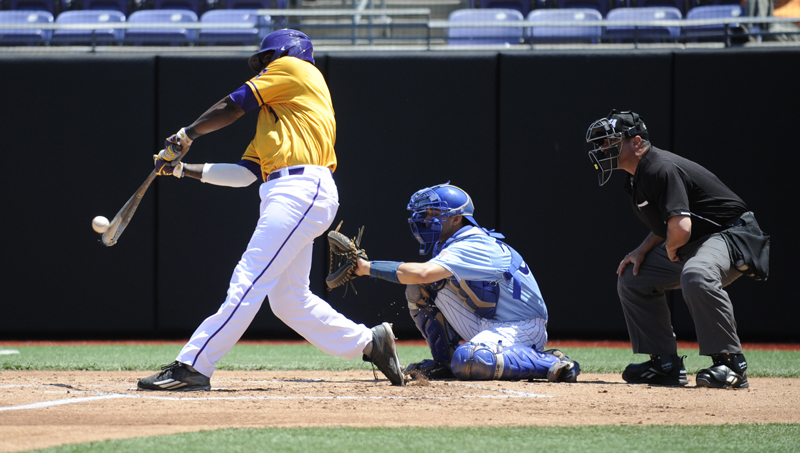 Dwanya Williams-Sutton gets all of a hit during ECU’s last home series. Williams-Sutton can be a game changer for the Pirates. One swing of the bat can make all the difference in the conference tournament, and his bat has a lot of power.

East Carolina baseball fans were hoping for some answers when the Pirates wrapped up their regular season in Connecticut. The Huskies swept ECU to begin a downward spiral to open American Athletic Conference play.

Had the Pirates gotten mentally tougher after losing two one-run games to UConn? Would a healthy pitching staff return ECU to its preseason top-10 form? Could the seniors step up at the plate and deliver offense in key situations?

Most questions were left unanswered. Ace Evan Kruczynski is back from an injury that cost him plenty of his senior season, but was saved for Tuesday’s AAC tournament opener against Central Florida. Chris Holba, who recently returned from an injury of his own, threw just 40 pitches in his start.

The Pirates patched together a nine-man pitching staff. Travis Watkins was the only player to collect multiple hits on Thursday as Huskie ace Tim Cate locked ECU down for eight innings en route to a 6-0 shutout win.

ECU’s offense made some noise in Friday’s game, but the Huskies were able to endure a late comeback attempt to win, 6-4, and take the series. Watkins dazzled at the dish again as he went 3-for-3. Fellow senior Charlie Yorgen had multiple hits, too, but an eighth-inning rally proved too little, too late.

Oddly enough, ECU’s most rounded game came when it benched most of its starters on Saturday to give them some rest heading into the tournament. Nick Barber’s double to left-centerfield scored Yorgen in the third. The Pirates added two insurance runs in the ninth inning when Dusty Baker doubled down the left-field line to plate Drew Henrickson. Baker then came in on Brady Lloyd’s knock through the right side.

ECU can take solace in not being swept heading into its last chance to earn a postseason bid, but the game was inconsequential.

There was promise that came out of the weekend, too. Kirk Morgan emerged as an unlikely hero on Saturday as he zoomed through eight innings of two-hit, shutout work. It led ECU to its only win of the three-game set, 3-0. Ryan Ross and Davis Kirkpatrick each worked out of the bullpen on Thursday and Friday, combining for six shutout innings.

With Kruczynski well rested and some other key arms peaking at the right time, the Pirates have the pitching to hang with top-seeded UCF.

No matter how good the pitching staff may be, though, there’s no reason to believe ECU can string together consistent offense to run through the conference tournament. The Pirates have played 24 games against these teams and struggled to get much going against the vast majority of them.

But, at the end of the day, baseball is a funny sport and things can always suddenly fall in place. ECU wasn’t exactly highly touted going into last year’s regional hosted by defending NCAA champion Virginia. The AAC has been a relatively even league all year. Anyone can beat anyone. This senior class came too close to Omaha a year ago to give up without a fight.