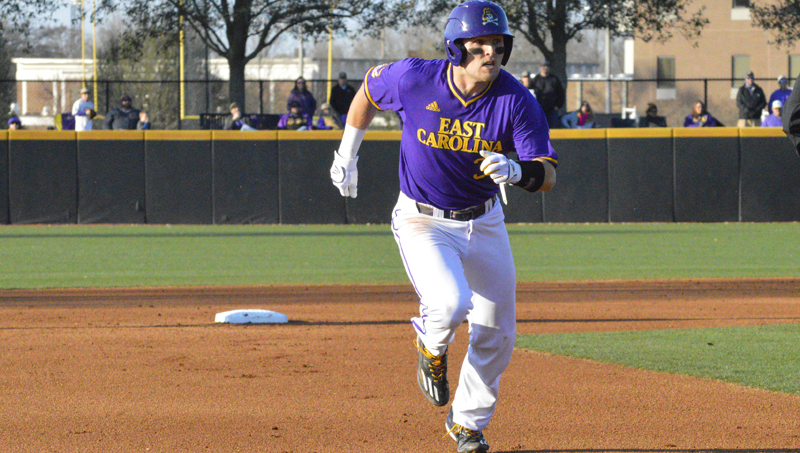 Charlie Yorgen makes a beeline for third base during a game against St. John’s in the Keith LeClair Classic early in the season. Yorgen has been ECU’s most valuable player thus far in the AAC tournament.

CLEARWATER, Fla. — East Carolina came alive in its 14-3 win over Central Florida in its American Athletic Conference opener. On Thursday, the No. 4 Pirates kept the magic going as they walked off on No. 4 South Florida, 6-5.

The Bulls, trailing 3-2 in the sixth, struck thrice to reclaim the lead. Kevin Merrell and Duke Stunkel notched back-to-back two-out hits to chase Chris Holba from the mound. Sam Lanier gave up a full-count, two-RBI single to Luke Borders as USF took a 5-3 lead.

The two sides neutralized each other until the ninth inning. Drew Henrickson notched a leadoff single to shortstop. Luke Bolka, hitting for Brady Lloyd, drew a walk to put the tying runs on with no outs.

After notching a big home run early in Tuesday’s game, Charlie Yorgen came up with another big hit when he belted an RBI double down the left-field line to plate Henrickson. Bolka knotted the game at 5-5 on Travis Watkins’ sacrifice fly to right field. With Yorgen on third, Kirk Morgan executed a picturesque suicide squeeze by laying a bunt down toward the right side, allowing Yorgen to score.

Matt Bridges picked up his first win of the season by pitching the final frame of the game. He walked one and struck out two to stymie the Bulls in the ninth. Trey Benton got the start for the Pirates. He was pulled after 3 1/3 innings after South Florida ran up his pitch count early. Ross Ryan finished the fourth frame by quickly setting down the next two batters.

West Covington continued to dazzle out of the bullpen late in the season. He pitched two shutout innings late in the game.

USF sent out Shane McClanahan to star the game on the mound. He worked ECU batters to the tune of 13 strikeouts during the regular season. This time around, he got tagged for a pair of unearned runs in his 3 2/3 innings of work. Yorgen, who reached on a single in the first, stole second and reached third on a throwing error before scoring on a wild pitch. McClanahan’s evening ended after a passed ball let Eric Tyler score to tie the game at two apiece in the fourth.

Yorgen gave ECU its first lead of the contest in the bottom of the fifth. He drilled a leadoff triple to right field and came in on Watkins’ sac-fly RBI.

With a trip to the tournament semifinals ahead, the conference championship is ECU’s to lose. Next up is the winner of UCF vs. USF in the loser’s bracket. Head coach Cliff Godwin has done well to keep pitch counts low in the bullpen, meaning ECU should have a leg up — or, rather, an arm up — down the stretch.