Williams set for one more year 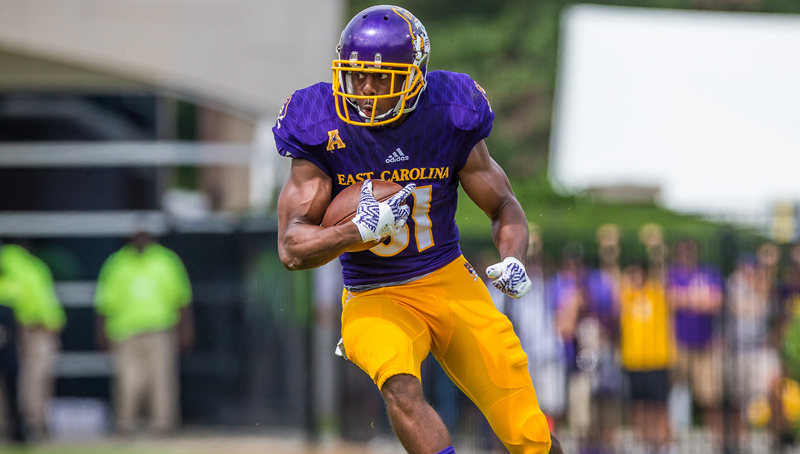 Jimmy Williams sees a defender coming his way during a game against Central Florida last season and makes a move to dodge him. Getting out in space and making an opponent miss is his one of his favorite things about football.

GREENVILLE — Perhaps Jimmy Williams benefitted from having NFL-caliber talent in Jones and Hardy soaking up the attention of opposing defensive backs. He was able to gash opponents with such efficiency that it’s almost like he wasn’t scouted at all.

Well, he’ll certainly be the top priority when others game plan for the Pirates this season. But, at ECU, there is never just one top-notch receiver. Williams won’t have to shoulder the entire load.

“Something I’ve really done is rely on Davon (Grayson) a lot,” Williams said after ECU’s spring scrimmage. Grayson came into the program the same time Jones did. Like Williams, though, Grayson’s career has been hampered by injuries.

“When I look across, I can say, ‘I might can take a play off’ because I know I’ve got Davon on the other side. He’s going to be on every play,” he continued. “My confidence in him is just as hit as my confidence in me. I feel like it’s going to make us such a better team.”

It’s not just Williams and Grayson, either. Quay Johnson has established himself as a target in the slot and thrives on screen passes. Devin Anderson can catch balls out of the backfield. Deondre Farrier showed improvement throughout his redshirt freshman season last year.

For Williams to build on what he accomplished a year ago, he has to continue to distance himself from his injury-prone past. He said that’s going to be one of his top priorities this offseason.

“A lot of mobility stuff. My body is a little older,” he said. “A lot of conditioning. I’m going to scale back on the heavy lifting with my legs and try to stay fresh. Staying focused on my body is going to be my biggest thing from here on out. I’ve got to go into the season in the best shape possible. I feel like that’s something I’ve done over the past few years, but I feel like I can push myself harder.” 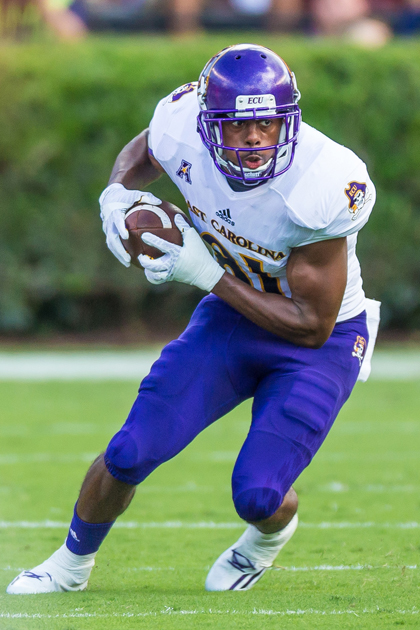 Jimmy Williams catches a pass during ECU’s game at South Carolina last season. He’s been ready since high school for the role he’s about to take.

Williams added that some of the keys are staying stretched out and getting in ice baths. He said he never did much of the latter before getting to ECU. He said nutrition is also important to him.

“Eating right is a big thing,” he said. “You don’t think about it on a regular basis, but the better you eat, the better your body feels. Just toning my body up and making sure I’m ready for the season.”

No matter how this season pans out, though, Williams will go down as one of the greatest to grace eastern North Carolina.

Football fans have already seen what Williams can do on the field. His talents were obvious to Beaufort County when he was just a sophomore. Years later, those skills are sharpened, refined and being broadcasted on nationwide television.

Williams has given more than highlight reel plays on the gridiron. He takes pride in his community service, which he was recognized for at halftime of the spring game.

He’s given a lot back to eastern North Carolina. Like so many great athletes before him, Williams also serves as an inspiration to those dreaming of playing at the same level. He recently made a surprise visit to Washington to talk prospective Pam Pack football players.

“He’s able to bring some of that back to the kids,” former Washington coach Sport Sawyer said. “He’s just like Terrance Copper. Both of them have very good qualities about themselves. They’re humble, but they work hard and they’ve got that fire in them. His personality is real bubbly. … He’s just a very good young man that comes from a good family.”

Football season is rapidly approaching. Williams is preparing day in, day out. He’s taking advantage of another year to play for the Pirates, and to potentially build toward a professional career.

Meanwhile, he also continues to serve as the latest example of how hard work and dedication can pay off. Dozens, even hundreds of Beaufort County athletes will return to the gridiron soon for summer workouts, all hoping to someday land in the position Williams has earned himself.