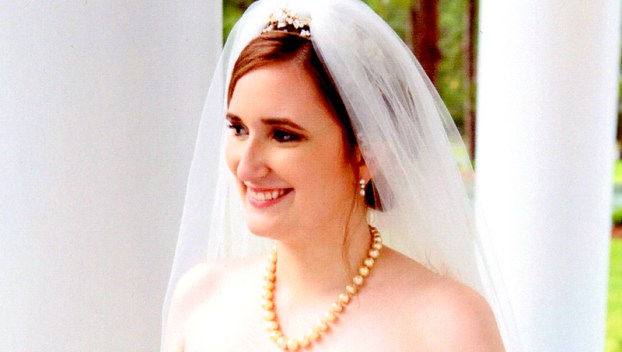 Keiley Nicholson Lamb and Lance Corporal Evan James Kimball were united in marriage on Saturday, June 24, 2017 at 6:00 in the evening at River Forest Manor in Belhaven, NC. Peter Messina, uncle of the groom of Whippany, NJ, officiated the double ring ceremony. Vows were spoken on the front porch of the Manor with a program of wedding music provided by Kathy and Dan Sprau on the harp and bass.
The bride is the daughter of Mr. and Mrs. James M. Lamb of Bath, NC. She is the granddaughter of Mrs. Verna Boyd and the late Mr. Clyde N. Boyd of Washington, NC and Mrs. Gwen Lamb and the late Mr. Keith L. Lamb of Washington state. The groom is the son of Mr. Gregory Kimball and Ms. Lisa Kimball, both of Ashburn, VA. He is the grandson of Mr. and Mrs. Paul Kimball of Whippany, NJ and the late Dr. and Mrs. Arnold Max, also of NJ.
After arriving in a horse drawn carriage, the bride was escorted by her father and given in marriage by her parents. She looked like a princess in her strapless ball gown of ivory with layers of lace and organza. The gown featured exquisite details including a chapel train and layered embroidered floral appliqués in champagne adorned with pearls and sequins and accented with pearl buttons down the back. Her delicate and dramatic ivory cathedral length single tier train featured beautiful filigree lace and sequin appliqué detailing in champagne. It fell from a champagne gold tiara encrusted with pearls and rhinestones. She carried a bouquet of pink, ivory, and champagne roses with cascading orchids with picture charms of her late grandfathers attached.
Ashley Lamb of Philadelphia, PA served her sister as Maid of Honor. She wore a gown in begonia pink and carried a bouquet of white and pink roses. Bridesmaids were Lauren Boyd, cousin of the bride of Clayton, NC; Gabriella Herbas and Jordan Hale, from Ashburn, VA, and Destineé Brown of Belhaven, NC, all friends of the bride. Their gowns were in tiffany blue and each carried a bouquet of roses in pink.
The mother of the bride wore a tea length dress with an ivory satin underlay and an organza overlay. It was accented with embroidered flowers in pink and champagne and had a satin ribbon tie at the waist. She wore a rose wrist corsage.
The groom chose his brother, Braden Kimball of Hollywood, CA to serve as his Best Man. Other groomsmen were Austin and Brian Lamb, brothers of the bride, of Bath, NC; Gregory Kimball, father of the groom of Ashburn, VA; Lance Corporal Vanderbilt Moceri and Corporal Steven Pursley, friends of the groom of Havelock, NC. Levi James Kimball, son of the bride and groom, served as Ring Bearer.
The bride and groom were whisked away in the horse drawn carriage after becoming the new Mr. and Mrs. Kimball. Immediately following the ceremony, guests enjoyed a cocktail hour and then dinner. The Manor was decorated in the wedding colors of tiffany blue, pink, ivory, and champagne. Guests shared in the traditional first slice cake cutting, champagne toasts, first dances as well as the bouquet and garter toss.
Music was provided by Kaylin Roberson and her band. The bride changed into her going-away ensemble, designed and made by her sister Ashley. The couple then exited the Manor through a bubble filled room.
The couple were blessed to have four generations represented on both sides in attendance as well as family and friends from across the US.
The couple enjoyed a honeymoon to Myrtle Beach, SC. They now reside in Havelock, NC.
A dinner was held at River Forest Manor in Belhaven, NC immediately following the rehearsal on June 23 hosted by the bride’s parents.
The bride enjoyed a shower given by her family at their home in Bath, NC on April 1.
Ashley Lamb, Maid of Honor and sister of the bride, hosted a fun filled Bachelorette weekend at the Sand Castle Cove Resort in New Bern, NC on May 26-28.
The bride hosted a tea party themed luncheon for her bridesmaids on June 23 at the home of her parents in Bath, NC.

Erica Leigh Joyner and Justin Scott Pate were united in marriage on Saturday, April 22, 2017 at five o’clock in... read more