Stepping Up: ECU seniors running out of time to make an impact 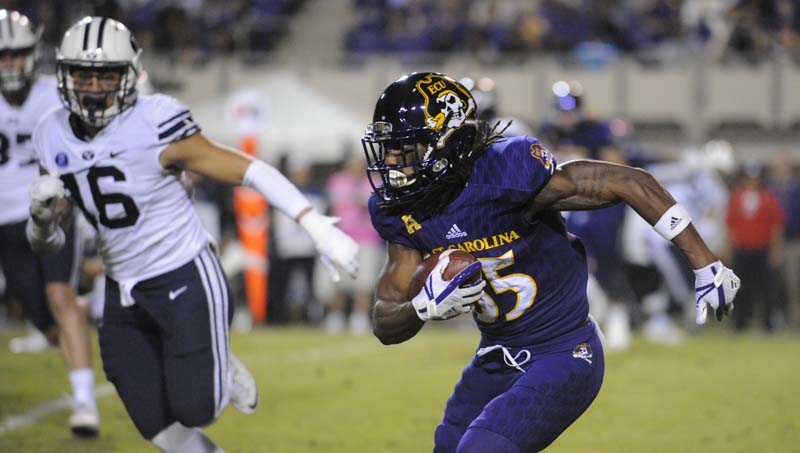 ECU senior Davon Grayson catches a screen pass and takes it down the left side against BYU. Grayson is one of few seniors to consistently make an impact this season.

With just four more games this season for East Carolina, it is more important now than ever for the seniors to step up and help the Pirates to finish out the season strong.

The Pirates are relatively healthy after a much-needed bye week. They’ll get injured players like Tim Irvin back in the fold before the final four American Athletic Conference games. ECU has had a lot of ups and downs, but after picking up a win at home Oct. 21 against BYU, the Pirates have a bit more momentum to finish out the season.

Winning one more game would match last year’s three-win total. It’s not the tangible improvement that fans would like to see in head coach Scottie Montgomery’s second season, or the improvements the seniors surely want to illustrate on their way out. If nothing else, though, it’s also not a step backwards.

ECU, even without the likes of Zay Jones and James Summers, still has the playmakers to accomplish that goal.

This season, Davon Grayson has stepped up, picking up 47 receptions for 795 yards and six touchdowns. Outside of Grayson, however, several of the veterans on the team have fell flat in leading the team to success. While injuries did play a role in some players’ lack of playing time, it didn’t account for the lack of assistance the seniors provided.

Players like Jimmy Williams and Stephen Baggett have to find ways to open themselves up on the field to give the ECU quarterbacks a veteran target. Williams has been struggling with injuries as of late — and Montgomery assured his healthy return at Houston this weekend — but he has failed to make some routine catches this season.

These older players only have a few games left. Some players have professional prospects, but many are likely to suit up for the final time at Memphis on Nov. 25. Regardless of future plans, this is their last chance to make a name for themselves.

There are only two more games to be played in Dowdy-Ficklen Stadium this year. It is time for these seniors to start taking their last few downs of football seriously. Winnable games against sub-.500 teams in Cincinnati and Tulane remain ahead. Finishing the season with four wins, after the way it began, would pique fans’ interest.

The younger players have showed up, and proved they have what it takes to play in a Pirate uniform. Now it’s time to buckle down and finish out the season strong to give the recruited players that are looking for a place to play ball something to get excited about, because as of right now, a 2-6 team isn’t it.

Stepping Up: Toughest games still ahead for Beaufort County