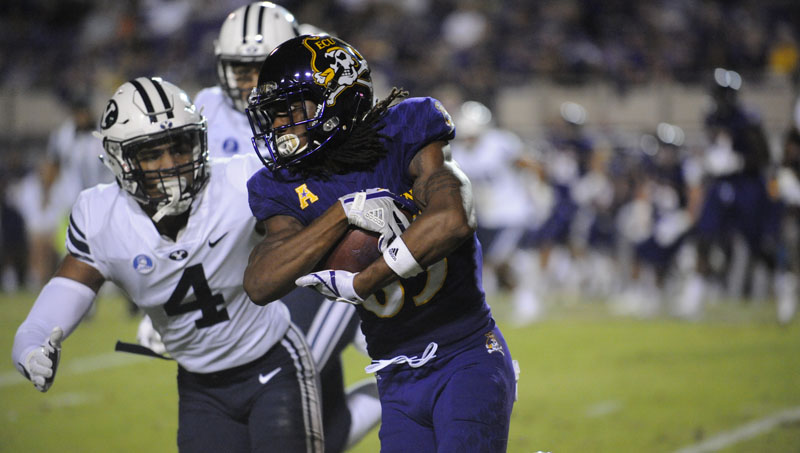 Davon Grayson gets both hands on the ball as BYU defenders close in on him.

GREENVILLE — East Carolina returns home Saturday to face Tulane. With just three games remaining this season, fans are starting to wonder if the Pirates will be able to improve upon last year’s 3-9 record.

The stands will fill once again this season as fans flood Dowdy-Ficklen Stadium on Military Appreciation night to watch another American Athletic Conference rivalry.

“I think it’s important that we understand the importance of our military,” head coach Scottie Montgomery said. “You bring up all that is going on in the country and it’s kind of hard to believe what’s going on.”

While Tulane (3-6, 1-4 AAC) has picked up one more win than ECU (2-7, 1-4 AAC), they hold the same record in the AAC. The Green Wave will still be a difficult opponent for the Pirates. Mobile quarterback Jonathan Banks will more than likely cause trouble for ECU’s defense.

So far this season, Banks has thrown for over 1,100 yards with nine touchdowns to go with close to 400 yards rushing and five more touchdowns. In the past, ECU has struggled with maintaining mobile quarterbacks.

In the Pirates’ game against South Florida, quarterback Quinton Flowers was the second leading rusher in the game with 10 carries for 93 yards and a touchdown. This weekend, ECU will have to work to maintain the 6-foot-3, 220-pound quarterback, and hold him to minimum yardage.

“(Banks) at quarterback does a really, really good job not only running their option packages, and it’s a gun option package not one of the ones you would see from the academies,” Montgomery said. “He’s also their second-leading rusher and he’s completing about 55 percent of his throws.

“So, he will take off rather than just throw the ball away. He will take off and scramble. I think our hardest thing for our defense this week is going to be to get him on the ground.”

ECU, on the other hand, has uncertainty at the quarterback position. Junior Gardner Minshew has excelled in his last two outings. He threw for 463 yards and three touchdowns at Houston, making it tough for Montgomery to decide between him and the more mobile Thomas Sirk.

In order for the Pirates to keep this matchup close, they will not only need to hold Banks, but also prevent turnovers. Tulane played Cincinnati last week. Although it lost, the game remained close due to ball security.

This is an area in which ECU has struggled. It was especially apparent last week as the Pirates turned the ball over thrice in a blowout loss to Houston. They outgained the Cougars and dominated possession, but a pair of interceptions and a fumble made it too easy for Houston.

If the Pirate offense fails to score when it has the chance and can’t hang on to the ball, Tulane could very well blow them out, too.

“It was a very clean game, no turnovers, just back-and-forth all the way to the last three minutes where Cincinnati had some breakout runs,” Montgomery said of Tulane’s last outing. “So, both teams played extremely hard.”

The Pirates will have an advantage being at home for this divisional matchup, but it will come down to execution. The game will kickoff Saturday at 7 p.m. in Dowdy-Ficklen Stadium.

Montgomery, remembering the feeling last time the Pirates were in Greenville, made another plea to the fan base.

“We’re going to need all of Pirate Nation to come out and give us that same atmosphere that we had for homecoming,” Montgomery said. “If we could get that again, our young players will be on the sideline and it will just be a great feel for our guys to come back home and play in a great environment. I really think that was the difference in the BYU game.”