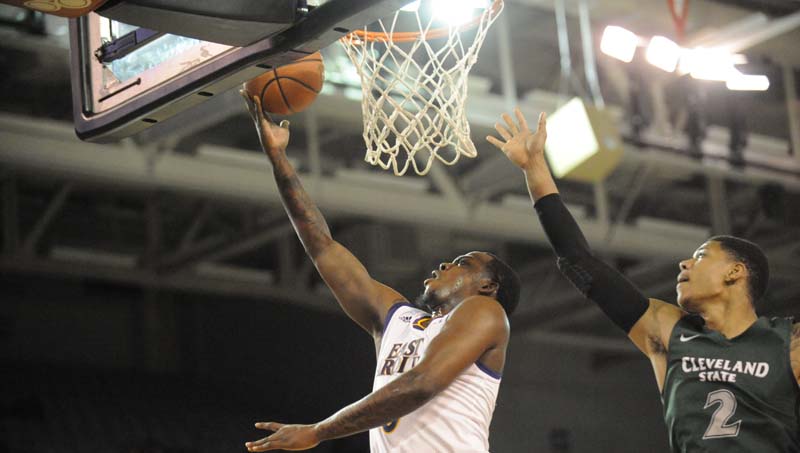 Isaac Fleming goes in for a layup down the stretch as ECU rallied to beat Cleveland State.

GREENVILLE — East Carolina needed a win when it hosted a lowly Cleveland State team on Monday. The Pirates, for the first time since 2011, lost consecutive non-conference games with the two defeats coming against Radford and Central Connecticut State.

Well, as much as the Pirates struggled, they managed to escape with a 72-69 win to propel them into Friday’s trip to Rutgers.

“I’m proud of our guys for finding a way — I don’t know how sometimes — to win,” head coach Jeff Lebo said. “I thought B.J. (Tyson) was terrific. He made some big, big shots for us coming down the stretch.”

In doing so, the Pirates had to erase a 7-point deficit with less than two minutes to go. Isaac Fleming scored six the eight points he registered in the waning moments, and Tyson knocked down a 3-pointer to fuel a 10-0 surge to close the game.

“It feels amazing,” Tyson said. “I love my brothers, especially (Fleming). He’s going through a slump right now. I’m telling him to keep his head in it because he’s the point guard. He found a way.” 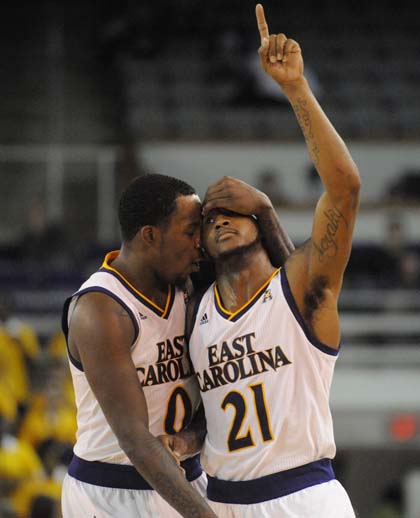 Minges Coliseum, albeit far from its capacity, got loud down the stretch as the Pirate fans willed ECU to the win. Tyson, who played all but three minutes Monday, felt the boost it provided.

“That adrenaline gives you a lot,” he said. “Especially with Isaac being in that slump, that adrenaline helps out a lot. I’ve been there. It’s happened to me before. Once you get that adrenaline, it’s like your mind goes completely blank and you just play your game.”

Cleveland State scored 11 unanswered after Jabari Craig opened the scoring with a layup. The Vikings built a 25-15 with eight minutes left in the first half, but the Pirates surged with a 10-0 run coming out of the media timeout to help produce a 33-32 lead at halftime.

The duo of Tyson and Kentrell Barkley took over from there. Barkley opened the second half with a quick layup, and Tyson knocked down a 3-pointer to extend the Pirates’ lead to 38-32 just 46 seconds in.

Tyson led all scorers with 25 points. Barkley added another 14. Fleming’s shooting woes continued as he went 2-for-6 from the field, but the Hawaii transfer dished out 11 assists to help make the Pirate offense go.

ECU’s lead grew to as much as 11 — 48-37 with 15:39 left in the game — but the visiting Vikings managed to get back into the game. Tyree Appleby sparked a 14-2 run with a long-range basket then capped it off with a layup that gave Cleveland State its first lead of the second half.

The smaller Vikings were able to outrebound an inexperienced Pirate forward corps. In addition to a slow start, which has been problematic as of late, ECU left plenty of opportunities on the table by going 11-for-25 at the free-throw line.

The Cleveland State trio of Bobby Word, Stefan Kenic and Appleby combined for 46 of the team’s 69 points.

ECU now sets its sights on Rutgers, which will prove to be a tough first road trip.