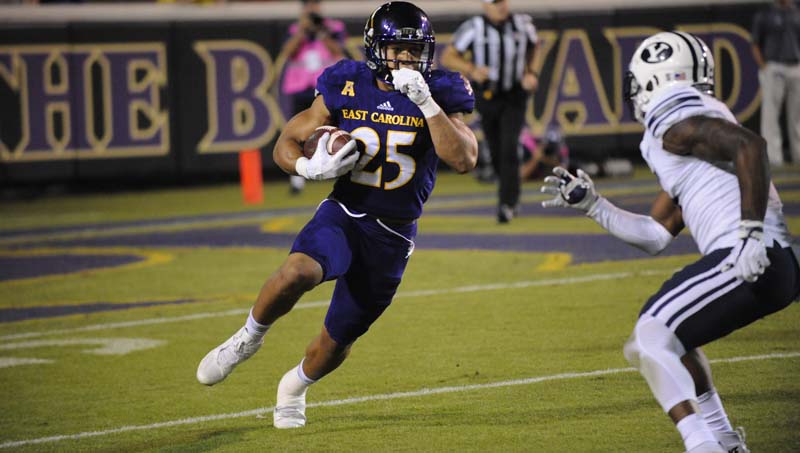 Junior running back Devin Anderson stares down a BYU defender as he runs the ball in ECU’s homecoming win.

MEMPHIS, Tenn. — East Carolina will finish its season Saturday when it travels to a Memphis team that knows it has at least two more games left on the slate. The American Athletic Conference West Division champion Tigers are bowl eligible and will also play for the league championship next week.

The Pirates are coming off of a blowout win over Cincinnati in last week’s senior day. This matchup will prove much tougher as the No. 17 Tigers await them at the Liberty Bowl.

ECU will lean upon leaders like Gardner Minshew, Trevon Brown, Kiante Anderson and Jordan Williams. Last week’s victory tied the total from 2016, and an upset win in Memphis would illustrate undeniable growth for the program.

“Offensively, Gardner Minshew had a fantastic day. He was even better on tape than I thought he was in the game,” said head coach Scottie Montgomery. “Defensively, Kiante Anderson and Jordan Williams on senior day came out and delivered great performances. They were really, really dialed in.”

The only team that Memphis has fallen to so far this season is undefeated Central Florida. Senior quarterback Riley Ferguson leads the Tiger offense. He has completed 239 passes for over 3,000 yards and 29 touchdowns.

One of Ferguson’s favorite offensive weapons is redshirt senior Anthony Miller at wide receiver. This season, Miller has contributed over 1,000 yards and five touchdowns.

“When you look at what Ferguson is able to do with his arm, he extends plays and he has probably one of the more exciting players at receiver Miller,” Montgomery said. “So we’ll have our hands full with him and we’re looking forward to the challenge.”

The Pirates will need to continue the shutdown defense they exhibited last week at home for a chance to keep their own offense in the game this weekend. Minshew threw for over 400 yards and the most touchdowns in his ECU career last weekend. Brown had the best game of his ECU career as he broke two records.

ECU’s offense has been the unit that has kept games within reach for stretches this season. The defense has struggled for most of the year, so keeping pace with the Tigers is important, but won’t be easy.

“They’ve done a really good job on defense of making sure that their offense always has the chance to keep the pressure on the team that they’re playing against,” Montgomery said. “I see coach working both sides of the ball to play new people. But this is a football team that has played well, played with skill and will continue to get better.”

The Pirates will kick off their final game Saturday at 11 a.m. in Tennessee. ECU will attempt to upset Memphis and end this season with a better record than last year’s 3-9.

“So now, we’ve got to go out and play against one of the best teams in our conference, if not the best, and get a chance to see where we are,” Montgomery said. “We’re really excited to go out and play, especially to go play with our guys being that this is the last time this team will ever play a football game together.”