ECU gears up for showdown with No. 5 Wichita State 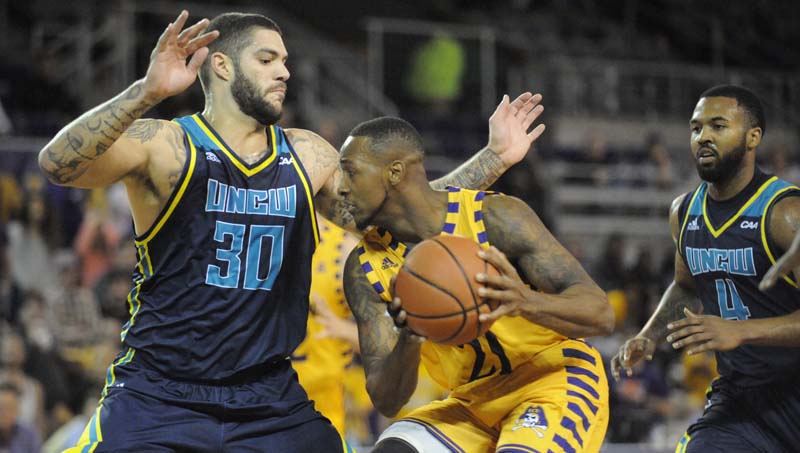 Senior B.J. Tyson drives the paint against UNC-Wilmington earlier in the season.

GREENVILLE — East Carolina is hardly known for its basketball tradition. Regardless, Minges Coliseum has been known to fill out for marquee matchups in the past. When it does, it makes for a home atmosphere that players dream of and that fans can be proud of.

Even ECU’s run to a CIT championship in 2013 produced electric settings. Now the Pirates prepare for one of their loftiest challenges in program history. No. 5 Wichita State, a newcomer to the American Athletic Conference, comes to Greenville on Thursday.

“It’s amazing anytime you have a team like this. You’ve got to be locked in and ready to go,” sophomore walk-on and Washington product John Whitley said. Growing up just down the road from Greenville, Whitley remembers a handful of times that the Pirates have taken on top-tier programs. Many of those games didn’t take place in Greenville.

Whitley believes this is the most impressive opponent to ever come to ECU.

“As far as I can tell, this is at the top for as long as I’ve been alive,” he said. “I remember (ECU visiting) Marquette and Dwyane Wade. This is right at the top for sure.” 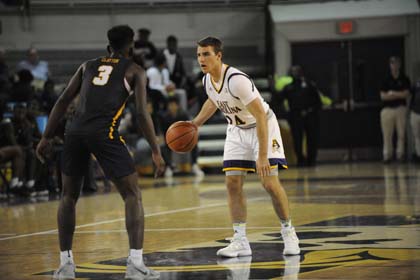 Sophomore walk-on John Whitley sizes up a defender earlier in the season.

For Whitley and the players, this is what dreams are made of. Any fan of the game looks forward to rare opportunities like this to challenge one of the best teams in the nation.

Senior guard B.J. Tyson has had runins with many of those top-flight teams. He and the Pirates went out to Chapel Hill to take on North Carolina his freshman year. They hosted Connecticut, the defending national champion, later that year.

For him, the highlight of the experience is when those clubs come to Minges Coliseum and the Pirates fans turn out in droves.

“I’m very excited. I haven’t really had a chance to play in a packed-out gym since we played UConn my freshman year,” he said. There were 6,856 people in attendance for that game. “It’s going to be the real deal. … You’re not going to be able to hear yourself think sometimes.

“Once you get your fans involved, you don’t think about nothing else. Your teammates get involved. Your bench gets involved. What can go wrong? We come in with the mindset that we’re going to play our game.”

Not everyone is putting significance on the top-five ranking of the upcoming opponent. Junior Kentrell Barkley said he expects that to hit him sometime on Thursday. He does, however, realize how important this game is to the fan base.

“At the end of the day, we’re doing it for them. If it wasn’t for the fans, we wouldn’t be playing the game of basketball,” he said. “That’s going to help us out. … It’s going to be a wonderful feeling (on Thursday).”

Interim head coach Michael Perry added: “One thing about Kentrell Barkley that you have to really appreciate is that it doesn’t matter if the Los Angeles Lakers or Cleveland Cavaliers are coming in here. Kentrell Barkley is going to bring it. I’d like all of our guys to feel that way. He doesn’t get overwhelmed by the opponent.”

The Pirates and Shockers tip off at 9 p.m. The game will be televised on ESPN2.