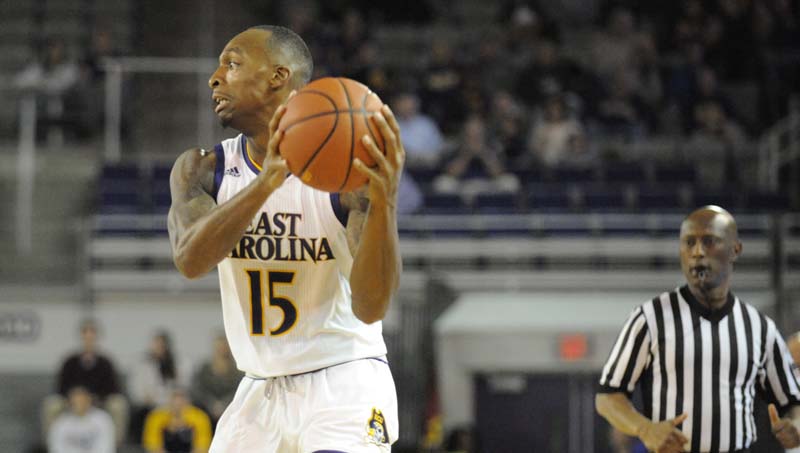 Kentrell Barkley brings the ball down the court and looks to move it around the perimeter.

GREENVILLE — Wichita State defeated East Carolina, 95-60, Thursday in Greenville. The Pirates welcomed the fifth-ranked Shockers into Minges Coliseum for the first time since they joined the American Athletic Conference.

The Pirates may have taken a loss, but it was a supported one. The crowd was electric. Attendance reached 5,539, where most of the inner bowl of Williams Arena was composed of ECU students.

The atmosphere was unlike anything ECU has seen in recent years. Fans were lively as the Pirates contended with their heavyweight opponent early on. Kentrell Barkley followed a 3-poitner with a steal-turned dunk. Freshman Shawn Williams knocked down a triple, too, to give them a 14-9 lead.

“The crowd was tremendous and they jumpstarted us, particularly from a defensive stand point. They were very engaged, very intense, and fed off the energy of the crowd,” said interim head coach Michael Perry.

But the Shockers recovered and settled in shortly after. They outscored ECU 36-9 from that point on to take a 45-23 advantage at halftime.

The Minges Maniacs — the organization for ECU’s student section — were especially shining tonight. They had taken to Twitter for the past week counting down the days and even hours earlier in the day.

Davis Searcy, president of the Minges Maniacs, was proud of his fellow students.

“It’s the first time a top-5 school has been here since 2006, so the students really showed up tonight,” he said. “Even when we were losing in the second half, the majority stayed the whole time. At the beginning of the game, we were right in it. You can tell the team was feeding off of us early. We had a good time, hopefully students will keep coming back.”
Junior guard Justice Obasohan added: “We’re just so grateful for the support that our fans give us.”

Even though the scoreboard reflected a loss, Pirate fans sailed the stormy seas.

Wichita shot 50 percent in the first half to ECU’s 32. The Shockers ran 16-6 on the Pirates in the first four and a half minutes of the second half. They boasted an overwhelming 32-point lead at the 10-minute mark of the second.

The largest lead overall for the Shockers was by 41 and five for the Pirates.

Kentrell Barkley played 33 minutes and posted 14 points for the Pirates, while B.J. Tyson scored 16 points the 34 minutes he played.
“For us, we’ve seen the elite of the elite in this league, and it’s a learning experience for our guys”, Perry said. “There’s a lot to take away from this experience.”

Added Tyson: “I feel like we put in a lot of effort. I communicated with the guys on not giving up.”

As exciting as the evening may have been in terms of fan support, ECU will look to put this one behind it as it looks to bounce back Sunday against Houston.

ECU gears up for showdown with No. 5 Wichita…